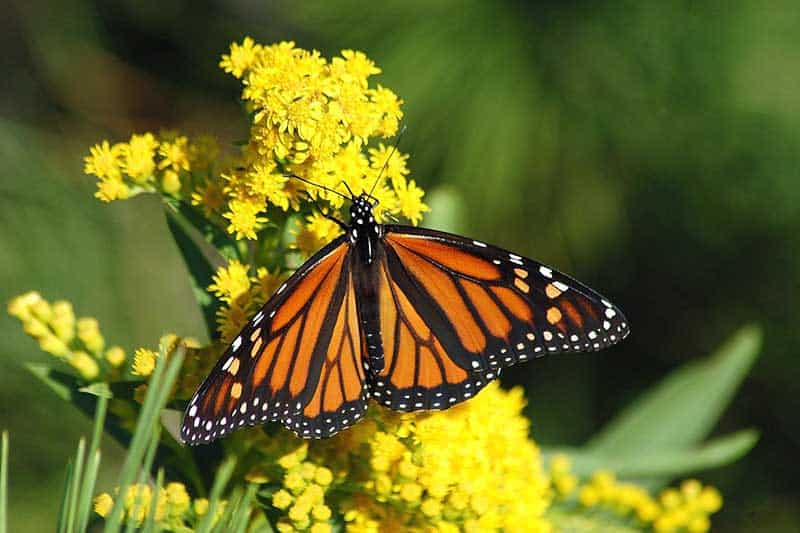 Texas is a big state, and it’s home to a lot of butterflies. The warm climate and the abundance of wildflowers make a butterfly paradise, and enthusiasts all across the state can find butterflies, often year-round. In this article we’ll look at and learn about some of the most common butterflies in Texas.

This species is often mistaken for the Monarch because of often has an orange and black coloration, though the one pictured above is more pink. However, unlike the monarch, the American Lady has mostly solid orange wings with dark brown to black near the edges, and two eyespots on the underside of it’s hind wings.

It can be found in most of Texas, although they migrate south for the winter, and so in some northern parts of the state they may only be present during the summer months. Caterpillars favor sunflowers, asters, and pussytoes. Adults are drawn to a variety of flowers, and will often be spotted in patches of the wildflowers in the spring and summer.

Like most swallowtails, these are large (4+inch wingspan) butterflies. They’re a deep black color with yellow spots along the trailing edges of the wings. Males have swept-back wings with rounded fronts, while the wings on females forward-angles wings with blue markings on the hind wings.

Larvae love dill, carrots, fennel, parsley, and celery, so you may find a lot of them if you have an herb garden. Adults seek out milkweed, clover, and thistles. You’ll find them throughout the state of Texas, and they’re common even in urban areas.

This is small species that’s common throughout the Western US, but in Texas you’re only likely to find them in far West Texas in the Chihuahua desert. The underside of the wings are white with green marbling, while the topside is nearly solid white with just a couple of black markings.

The largest butterfly in North America, the Giant Swallowtail routinely reaches a 6 inch wingspan. They have dark brown/black wings with yellow markings, and, combined with their huge size, this makes them very distinctive and easy to identify.

You’ll find them mostly in East Texas and less frequently in Central and North Texas. They stick to wooded areas and don’t like to be out in the open. As adults, they like to feed on lantana and zinnias as well as milkweed. This makes them a common sight in residential gardens, where lantanas and zinnias are popular with gardeners.

Olive brown or gray brown with dark spots, this species is common in most of central and east Texas. Caterpillars live and feed on hackberries (hence the name), but adults drink nectar from all kinds of flowers. This species is a common sight in both city parks and residential gardens.

With their wings folded, they’re a dull brown color, and look almost like a dead leaf. The top of their wings, though, are brilliant, iridescent blue striped with black. In Texas, this species is found only in the Rio Grande valley, on the border with Mexico.

They’re favorite food is rotting fruit, rather than flowers, so they’re somewhat difficult to attract to a butterfly garden.

The best known, best loved, and most easily recognizable butterfly in North America, Monarchs are famous for their striking orange and black wings, their huge migrations, and their love of milkweed plants.

The milkweeds they feed on as caterpillars make them mildly toxic as adults- it’s not harmful to most predators but it does make them taste so bad that few predators are interested in eating them. Monarchs spend the winter in Central Mexico, and them migrate as far as 3,000 miles to spend the summer all over North America. The best time to spot them in Texas is in the fall or the spring, as they migrate through the state.

Very similar in appearance to the American Lady, the easiest way to distinguish the two is that the Painted Lady has four eyespots, while the American Lady only has two. You’ll find these invertebrates all over Texas, but they usually migrate south into Mexico for the winter.

Larvae feed on thistles, mallow, and legumes. Adults like the nectar of thistles, clover, and asters.

A large, cream-colored butterfly with elegant black stripes on it’s wings, you’ll find this species throughout much of Texas, especially the Panhandle and West Texas. They prefer to feed on trees rather than wildflowers, which means that you’re best chance of finding them is to look in places that are heavily wooded, including neighborhoods with big, mature trees in them.

This species is orange and brown with white spots. The orange is usually on the portion of the wings closest to the body while the wingtips tend to be brown. The underside is much paler with more orange than the top side.

You’ll find Texas crescents in all parts of Texas. Caterpillars feed on acanthus, ruellia, shrimp plant and water willow. Adults like the nectar from many different flowers, and you’ll frequently spot these butterflies in residential gardens and city parks.

This is a big, beautiful butterfly with distinctive tiger stripes on it’s wings. Males are always yellow, but females may be yellow or black. Females also typically have some blue on their hind wings, while males don’t.

They feed on a huge variety of flowers, and are drawn to woodlands and mud puddles. You’ll often see them in residential gardens and city parks with the flowers in the landscaping can attract them in large numbers. They live and breed throughout Texas.

This butterfly is mostly a uniform brown with eight large eyespots on it’s wings. In Texas you’ll mostly find it in warm, humid South Texas. They like open fields and lowlands, which describes just about all of southern Texas. The adults like a wide variety of flowers, and so you can easily attract them to your garden by planting native flower species.