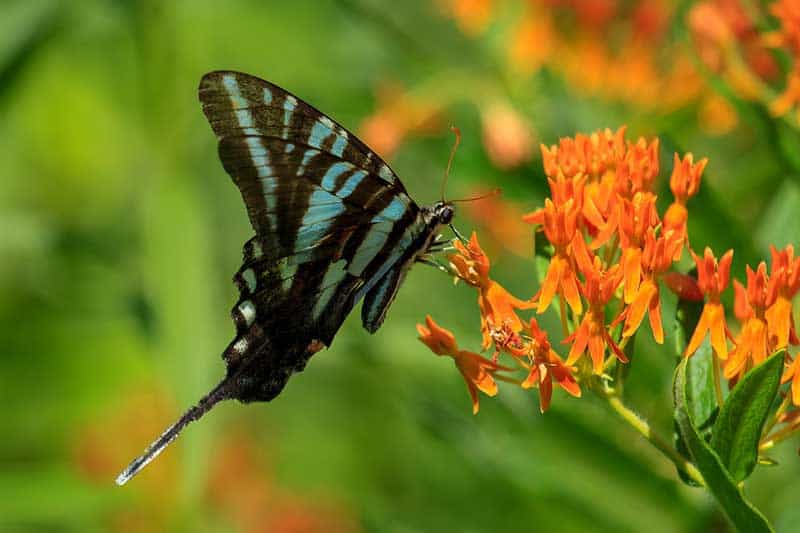 Florida is home to dozens of butterfly species. Butterfly watching is a great activity for people of all ages, and with the warm climate in the state, it’s fairly easy to find butterfly gardens year-round, or even to plant your own. With that said, here are just a few of the most common butterflies in Florida along with their favorite flowers.

Perhaps the most famous, instantly recognizable butterfly in North America, the Monarch is known for it’s striking black and orange colors and it’s impressive migrations. These butterflies spend the winter in the mountains of Central Mexico, and every spring they migrate back and spread all over North America.

Their caterpillars feed exclusively on milkweed plants, which are toxic. The caterpillars store these toxins in their bodies and they remain toxic to predators for their entire lives. In fact, their bright colors are a warning to potential predators to stay away. They can be found throughout Florida in the spring and summer.

This species has a very descriptive name: it does indeed have long, narrow wings with black and white stripes on them. Although it’s most common in South Florida, it can be found all over the state. Like the Monarch, their larvae feed only on a specific plant: the Passion vine. Just like the milkweed eaten by Monarch caterpillars, this diet of Passion vine makes the caterpillars toxic to predators.

They’re one of the only butterflies that eats pollen as well as nectar, and they’re most often found in hardwood forests and thickets. The Zebra Longwing is the State Butterfly of Florida.

Swallowtail butterflies are characterized by their large size and the distinctive shape of their hind wings, which closely resemble the tail feathers of swallows. This species has distinctive black and white stripes along it’s wings.

Caterpillars feed on a handful of shrubs, favoring the young leaves. As adults these invertebrates feed on the nectar of wildflowers, and they aren’t too picky about which ones they’ll eat. You can see them in Florida from March through December, all over the state.

With a wingspan of 6 inches and bright yellow spots along it’s black wings, this is an incredibly easy butterfly to identify, and it’s always a treat to see one. There’s no mistaking this enormous butterflies for any other species.

Larvae resemble bird droppings, and like to feed on the leaves of citrus trees and prickly ash. Adults can be attracted with Lantana, Azalea, Goldenrod, and milkweed. They can be found in Florida year-round.

These butterflies are a deep, chestnut brown with white spots along the wings, which have black edges. They can grow to have a 4 inch wingspan, and they live all over the state of Florida, where they can be found year round in sunny, open areas. They’ll be one of the most frequent visitors to your yard.

The larvae feed on milkweed plants, and this species is toxic to predators even as adults. Adults still feed on milkweed, but their diet expands to include almost any flower nectar.

These large, pale green/yellow butterflies could be easily mistaken for Luna moths, and the easiest way to tell them apart is the cloudless sulphur is active during the day, while the Luna moth is active at night.

Larva feed on Cassia plants- this is the same family of plants from which we get most of the cinnamon you find in the grocery store. Adults are drawn to Geiger tree, Bougainvillea, Morning Glory, and Cardinal flowers.

Named for their pattern of oranges, yellows, and browns, the Painted Lady can be found in South Florida. Thistles and mallows are home to their caterpillars, and adults are still drawn to thistles, along with milkweeds, button-bush, and ironweed.

This species is commonly spotted in yards and parks, and there’s a good chance you’ve seen quite a few of them.

This species has iridescent white wings with brown, orange and yellow markings. In the winter, they’ll be paler in color and slightly larger, while in the summer they’re darker and smaller. They live all year long in south Florida.

Caterpillars feed on water hyssop, frog-fruit, verbena, and wild petunia. Adults are attracted to Sheppards needles more than anything else, and they like to live in moist, open areas.

A bright, almost solid orange, broken only by minimal black stripes on the top, this species is easy to spot at a distance. Passionflower vines are their larval host plant, meaning the caterpillars feed on them exclusively.

Adults are especially fond of Lantana and Sheppard’s needles, but you’ll see them in most butterfly gardens and they’re very common in parks and roadside wildflower patches. They migrate south into Florida towards the end of the summer, and return north in the spring.