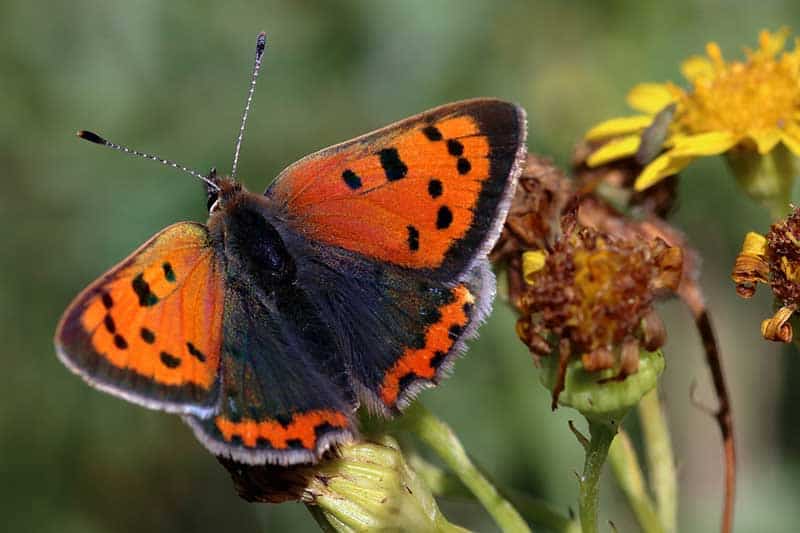 Butterflies are beautiful flying insects with wings of varying colors and patterns. With around 20,000 species worldwide and 725 species in North America, it’s common to find them flying around flowers in the summer. However, where do they go during the winter, and do butterflies migrate? These are good questions to explore!

This article will give you answers about butterfly migration and their behaviors in different weathers, including how their life cycle influences migration.

Yes, plenty of butterflies migrate. They are cold-blooded insects that can’t handle the cold weather, so most of them will travel to warmer locations. They also need to be near locations with nectar flowers – the main food source for most species.

Some butterfly species also migrate to establish new colonies. When they stay in one place for too long, their caterpillars can consume all the host plants in the area, so the butterflies need to migrate to find new food sources.

Although the monarch butterfly (Danaus plexippus) migration route is popular, there are plenty of other species that also migrate. Examples include:

Where do butterflies migrate to and from?

Butterflies that spend their summers in the northwestern part of America typically can’t survive the cold winters. Species such as mourning cloak or question mark butterflies will migrate south in the fall to warmer weather.

There are also species that migrate to the desert southwest or along the Gulf Coast in the Deep South during the winter. These include the painted lady and buckeye butterflies

The reverse migration route also occurs, where North American butterflies from the southern U.S. areas and Mexico can be seen heading to northwestern areas as the weather gets warmer.

They do this to help repopulate those regions after cold winters. Examples of species that will migrate northward include the painted lady and little yellow butterflies.

Do all butterflies migrate?

No, not all butterflies migrate. Some species don’t spend the winter as adults due to their short lifespan. Scientists have also found that butterflies raised in captivity don’t migrate.

There are also butterfly species that will “hibernate” in protected locations during the winter. These include the tortoiseshells (Nymphalis) and angelwing (Polygonia) butterflies. They typically shelter from the cold by tucking themselves away:

What butterfly migrates the furthest?

The monarch butterfly is the species studied the most and crowned the long-distance migration champions. They can travel as much as 4,000 miles round trip!

These butterflies typically live in the northern U.S. and Canada during the summer and migrate south before the cold. You can find monarchs in Florida, California, and Mexico during the winter. They will feed on nectar flowers along their route and complete their migration in two or fewer months.

You may also like:  9 Sloth Adaptations in the Rainforest (Pictures)

Monarch butterflies then spend the winter in the warmer regions resting for their return flight. Some die before their next migration. Instead, they lay eggs, and the newly emerged butterflies from caterpillars make the northward migration.

Other interesting facts about butterflies

What is the lifespan of a butterfly?

On average, adult butterflies live around one month. This short lifespan is why most species don’t migrate since they don’t live long enough to experience winters. In fact, the shortest lifespan of a butterfly is the small blue (Cupido minimus) and coppers (Lycaena) butterflies that live as adults for only a few days!

Species that do migrate will typically have longer lifespans. For example, the mourning cloaks live between 10 to 11 months and monarchs can live up to 9 months. The butterfly with the longest lifespan is the brimstone (Gonepteryx rhamni) that lives up to 13 months.

Yes, butterflies do sleep. Most butterflies are active during the day and will sleep at night. They typically perch underneath a leaf or crawl:

However, butterflies in the family Hedylidae called American moth-butterflies will sleep during the day and are active at night, similar to most moths.

Where do butterflies go in the rain?

It’s common to wonder what happens if a butterfly gets wet and why we don’t see them flying around in the rain. While rain generally doesn’t harm butterflies, they can’t fly well with wet wings and very heavy rain can be risky.

Butterflies can live through storms but need to land and find a place to wait out the rain. They will fold up their wings and typically hide out in or under:

Once the rain stops, you can often see butterflies basking in the sun to dry off their wings. They also need to increase their body temperatures before they can fly again.

How do butterflies spend the winter?

Most butterflies in areas with colder climates will spend the winter as caterpillars that burrow into leaf litter to keep warm. Examples include the Baltimore (Euphydryas phaeton) and checkerspot (Euphydryas editha bayensis) butterflies.

Typically, each butterfly species will only be dormant during the winter at one stage of their life cycle. This is because that stage is their most resistant to the cold.

While not all butterflies migrate, especially due to their short lifespan of around a month, there are many species that do make trips to warmer climates or back again once the cold has passed.

The monarch butterfly is known to migrate the furthest and their release is widely admired by many. Butterflies also have abilities to shelter away from the cold or rain and avoid needing to migrate during various weathers.