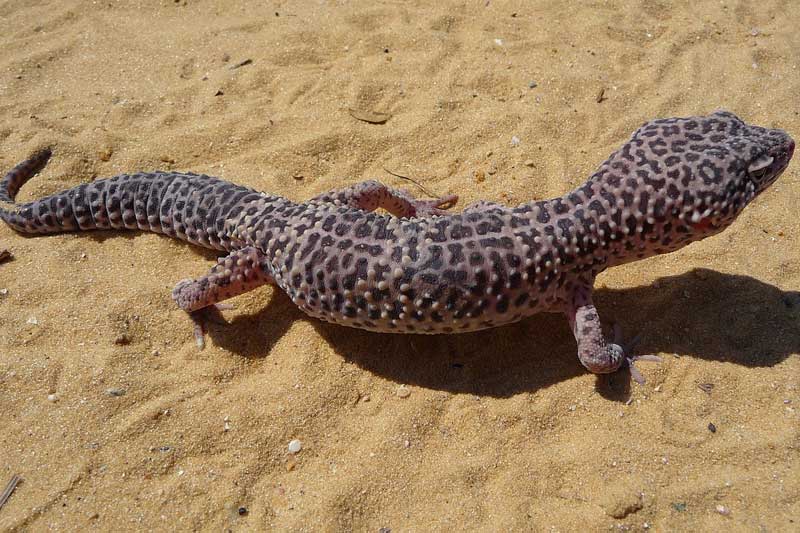 Most people know that lizards have the unique ability to regenerate their tails. A popular exotic pet for many people is the Leopard Gecko, so that begs the question “can a Leopard Gecko regrow its tail?”. That’s exactly what we’re going to talk about in this article, as well as some interesting info about the process of tail regeneration.

While other species of animals are able to regenerate appendages, such as starfish, lizards are the closest ones to humans that can.

The main reason that a gecko’s tail falls off is in self defense. If a predator has a gecko cornered, and that can even be you as the pet owner, the gecko may instinctively drop it’s tail in an attempt to save its own life.

In the wild this is often enough to distract the predator for long enough to make a daring escape. When the tail first detaches it will still be moving due to nerve endings, and the predator may go for the easy meal allowing the gecko to escape.

Can a Leopard Gecko regrow its tail?

Yes! A Leopard Gecko is able to regenerate the lost tail. It will never look perfectly matched up with the rest of its tail and body, like it did previously, but it will regrow.

How many times can can a Leopard Gecko regenerate its tail?

There is not a set number of times that a Leopard Gecko can regenerate its tail, but certainly multiple times. In many cases, lizards may lose the ability to regenerate their tails as they grow older and become “seniors”.

How long does it take for a leopard geckos tail to grow back?

Researchers have discovered that due to the gecko’s stem cells they are almost immediately able to begin the process of regenerating their tail. The process is complex so it can be somewhat lengthy, and often take over 60 days for the Leopard Gecko to fully grow its tail.

Do Leopard Gecko tails ever just fall off?

A Leopard Gecko’s tail will never fall off for no reason, there is always an underlying cause. The main reasons that a Leopard Geckos tail would fall of are:

The tail is actually dropped when the sphincter muscle contracts to totally sever the tail between two vertebrae. Afterwards, a natural process called vasoconstriction occurs to limit blood loss.

What do you do when your leopard geckos tail falls off?

If you own a Leopard Gecko as a pet then there are a few things you should be aware of or do if your gecko’s tail detaches.

You may also like:  Owls in Nebraska (9 Species With Pictures)

Does it hurt a gecko to lose its tail?

Lizards do not have feelings or feel emotions in the same way that humans do. Dropping a tail is a natural defense mechanism for a Leopard Gecko thus the lizard should not feel any type of pain in doing so.

Can all lizards regenerate their tails?

From what I can tell most lizards do have the ability but the answer to the question is no, not all lizards regrow their tails. For example the Crested Gecko may lose its tail, but it will not grow back. Instead they will simply adapt to life without a tail.