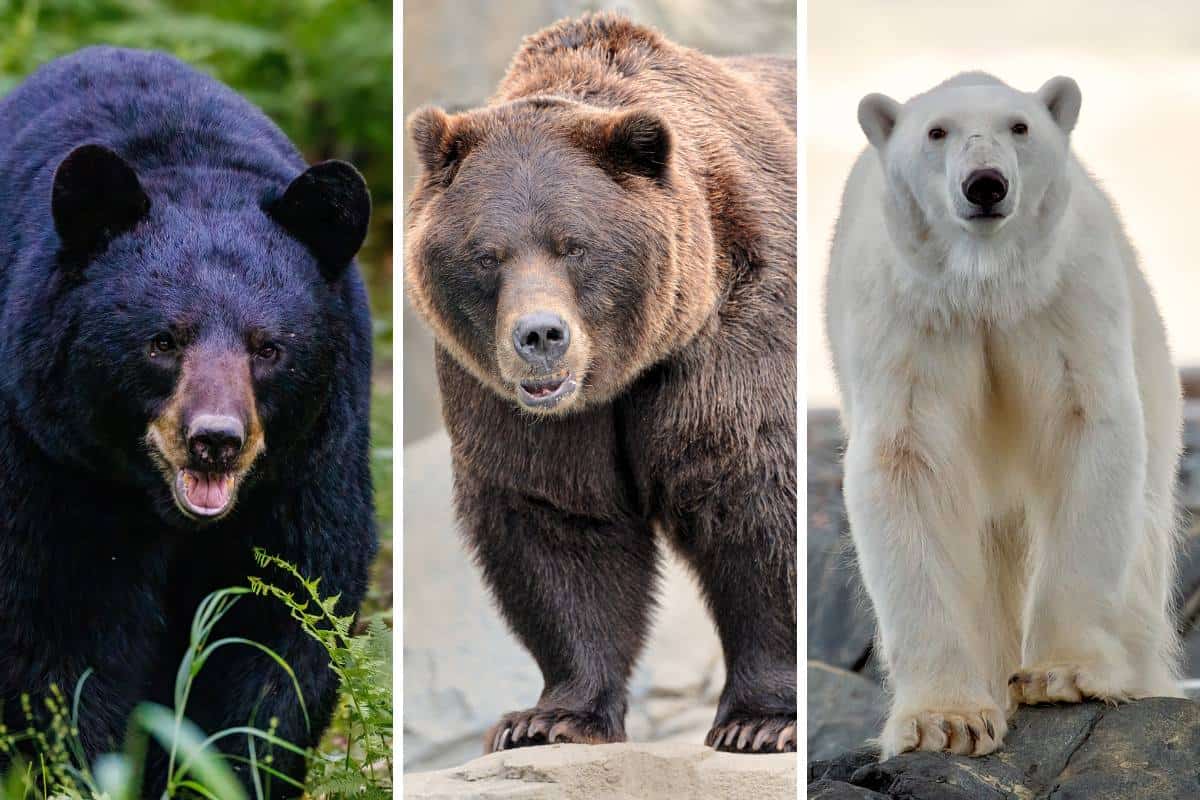 3 Types of Bears in North America

Bears are omnivorous, eating berries, plants, and animals. They have nonretractable claws great for digging, climbing, and catching prey like fish and small animals. Bears can grow to be between four and 8 feet tall and weigh between 60 and 1600 pounds.

The 3 species of bears you’ll find in North America are the American black bear, the

The most common type of bear in North America is the black bear. They also happen to be the smallest of the three types of bears found in North America, measuring five to six feet long and weighing between 200 and 600 pounds. Despite the name, black bears come in various shades, mainly black and brown.

Black bears can be found throughout North America, from Alaska, across Canada, across the United States, and in Northern Mexico. Like other bear species, black bears prefer to live alone. Males and females can be seen together during mating season, but after that, they are solitary creatures.

Females are pregnant for seven months, after which they give birth to babies, called cubs. They usually have two cubs but can have up to five. The cubs stay with their mother for the first one and a half years of their life before setting off on their own.

Black bears have a great sense of smell and are highly attracted to human food, which can pose a threat to the bears and humans. Instead of true hibernation, black bears go into a state known as torpor. During torpor, the black bear’s body temperature and metabolic rate are lowered until Spring, when they emerge from their dens.

These large bears are between five and eight feet long and weigh an average of 800 pounds. They live around 25 years in the wild and even longer in captivity.

While mostly solitary, females can be seen with their cubs, and groups of grizzly bears can be seen in Alaska in places where salmon swim upstream to lay eggs. This ample supply of salmon provides grizzly bears with enough food to get them through hibernation. Grizzly bears that live in colder climates hibernate for five to seven months.

Grizzly bears in warmer temperatures do not hibernate. They can run up to 30 miles per hour and can pose a severe threat to humans if the bear feels threatened.

Grizzly bears are protected by the U.S. Endangered Species Act, which has helped their once-dwindling population grow. In the United States, grizzly bears are common sites in Yellowstone National Park.

Polar bears are large white members of the bear family. They are the largest predators on land, measuring around 8 feet in length and weighing between 330 and 1500 pounds. Polar bears typically look white, but their fur is actually transparent and hollow, and their skin is black.

The black skin absorbs sunlight, helping the bear stay warm. The light reflects off the transparent fur, making it look white. Ursus maritimus means “sea bear” in Latin, which is an apt name for these Arctic creatures.

They can be found in North America on the ice-covered waters of Alaska. They have adaptations to help them stay warm in the Arctic climate, including a thick layer of fat and a water-repellant coat. Polar bears have specialized paws that act as snowshoes to help them walk on ice and snow.

Their large paws also help them swim through the sea. They can swim at a pace of 6 miles per hour. Polar bears spend much of their time hunting their primary source of food, which is seals. Mating season occurs between April and May, and more often than not, the female gives birth to twins.

Single cubs occur about 30% of the time, and triplets are rare but can occur. Cubs stay with their mothers for around two and a half years, after which the cubs either spark out on their own or are scared off by a male looking to mate with their mother.

Polar bears are considered a vulnerable species, with the most significant threat being ice loss due to climate change. There are currently around 26,000 polar bears worldwide, and it is estimated that the number will continue to decline if they are protected.