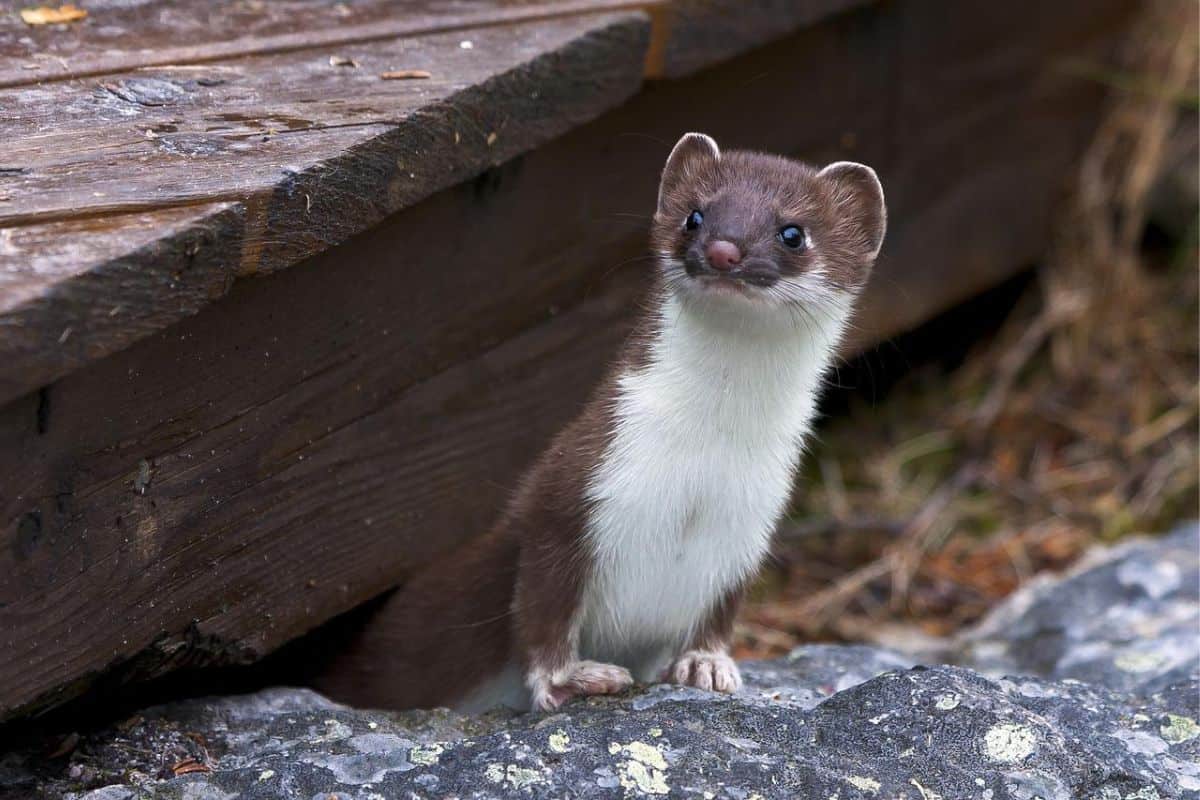 14 Animals that Start with W

Weasels are carnivorous animals. They enjoy eating small mammals like mice and rabbits, and would also eat birds, eggs, reptiles, and amphibians. These animals are most active at night and spend the day sleeping in holes or burrows under rocks or logs.

Their fur is thick, and they have long tails with dark rings around them. Additionally, they can easily move through tunnels thanks to their long bodies and short legs! In North America, there are three species of weasels: long-tailed, short-tailed, and least.

Walruses are the largest members of the pinniped family and can weigh up to 1,700 kilograms. These animals have thick blubber to keep them warm in the harsh Arctic environment, and they feed with their tusks. Walruses are generally thought to be extremely social animals that live in groups known as pods.

They occupy areas close to the ice sheets in the North Pacific and North Atlantic Oceans. Their diet is mostly clams and other shellfish found in deep waters beneath the ice pack.

Western Rat Snake, also known as the Black Rat Snake, is a large and impressive snake. It can grow to be up to 6 feet long, but it is not considered dangerous to humans. Their bodies are dark brown or black with lighter banding.

They inhabit a wide range of habitats, including farms, wooded areas, hillsides, and even urban areas where mice are frequently found. Its main food sources are small lizards, mice, rats, rabbits, birds, and eggs.

The white-tail deer is a North American deer species. You can find this animal in forests, brushy areas, meadows, and open fields, where it can eat grasses, clover, fruits, and nuts. They will also eat tree bark and twigs if there is nothing else available to eat at certain times of the year.

North America is home to a wide variety of worms. In fact, there are over 100 different types of earthworms in North America alone. While most of these worms live underground, You can also find some in forests or in your garden!

Earthworms are highly beneficial creatures because they aerate the soil and make it easier for plants to absorb water and nutrients from the ground. They also aid in the breakdown of dead leaves and other plant matter, allowing nutrients to be recycled back into the soil and used by plants again.

The walleye is a cold-water fish native to North America, found in both Canada and the United States. They have an average lifespan of about seven years, but some can live to be over 20 years old.

Walleye fish prefer slow-moving bodies of water, such as rivers and lakes. These animals tend to avoid areas with too much current or too little vegetation to provide predator cover.

Western Hognose Snakes are a type of snake that is only found in North America. The average length of this snake is 2 to 3 feet, with males slightly outweighing females in length. They were given the name hognose snake because of their keeled scales and hog-like nose.

These snakes are also typically light olive green or grayish brown in color. If you’re ever lucky enough to come across one of these animals in the wild, you can use these characteristics to help identify it

The Whooping Crane is a bird in North America that is named after their call, which they use to communicate with one another and attract mates. It’s a distinct sound that can be heard up to two miles away. The majority of these birds are white, with red accents on the head and black wing tips.

They have long legs and necks to reach food at the bottom of the lakes. These birds also frequently consume insects and mollusks, but if food is scarce, they will also consume snakes or even small mammals!

Wolverines are among the most elusive animals on the planet. They are native to the northern hemisphere and are known to be very solitary creatures. With its thick, brown fur and powerful muscles, this animal is built for hunting and surviving in cold climates—and its behavior reflects those characteristics.

The gulo gulo (wolverine) is also known as a “glutton” because it eats everything from small rodents to large deer carcasses.

The Wood Turtle is a fascinating and beautiful reptile native to the United States. It is found in the wild, most commonly in rivers, wetlands, and hayfields. Tadpoles, worms, slugs, leaves, and grasses are just a few of the many small animals that the omnivorous wood turtle consumes.

During the winter, the wood turtle spends most of its time in the water; after that, it forages for food on land. A female wood turtle can lay four to twelve eggs at once.

Woodpeckers are bird species that have adapted to living in trees. They can live in trees because of their strong beak, which they can use to peck into trees and eat insects and grubs. Woodpeckers are found all over the world, though not everywhere has woodpeckers.

Worm snakes are a type of snake that you can find in North America. These snakes have rounded, almost circular heads, and their scales are smooth, shiny, and brightly colored. They come in a variety of colors, including yellow, red, orange, greenish-blue, brown, or black, with white or yellow spots.

Typically, the belly is lighter than the back. These snakes are not venomous and are completely harmless to humans. They are beneficial because they eat insects like crickets, slugs, and worms that can harm crops.

Their primary diet consists of earthworms, but they will eat slugs and snails if given a chance.

The wasp can be found all over North America, but it is more common in some areas than others. It prefers warm climates with abundant food sources. The insect typically constructs its nest underground or in trees, as well as in hidden locations such as bird nests and attics.

Wasps are known for their enormous size, with some species reaching one inch in length. They are either black and yellow or black and brown. Their diet consists primarily of nectar from flowers, but they may also consume other insects if they come across them while flying around looking for food.

The wolf is a predatory mammal that hunts animals for food in packs. They are carnivores, eating mostly elk, deer, moose, bison, rabbits, hares, and beavers. They also consume small rodents like mice and voles.

Wolves hunt in packs and will attack weak or injured large animals such as cattle or horses. They use howling to find each other when separated from their pack members during hunting expeditions or mating.

Wolves use scent marking to mark territory boundaries and individual territories within a pack’s territory, allowing them to keep track of where everyone is at all times.