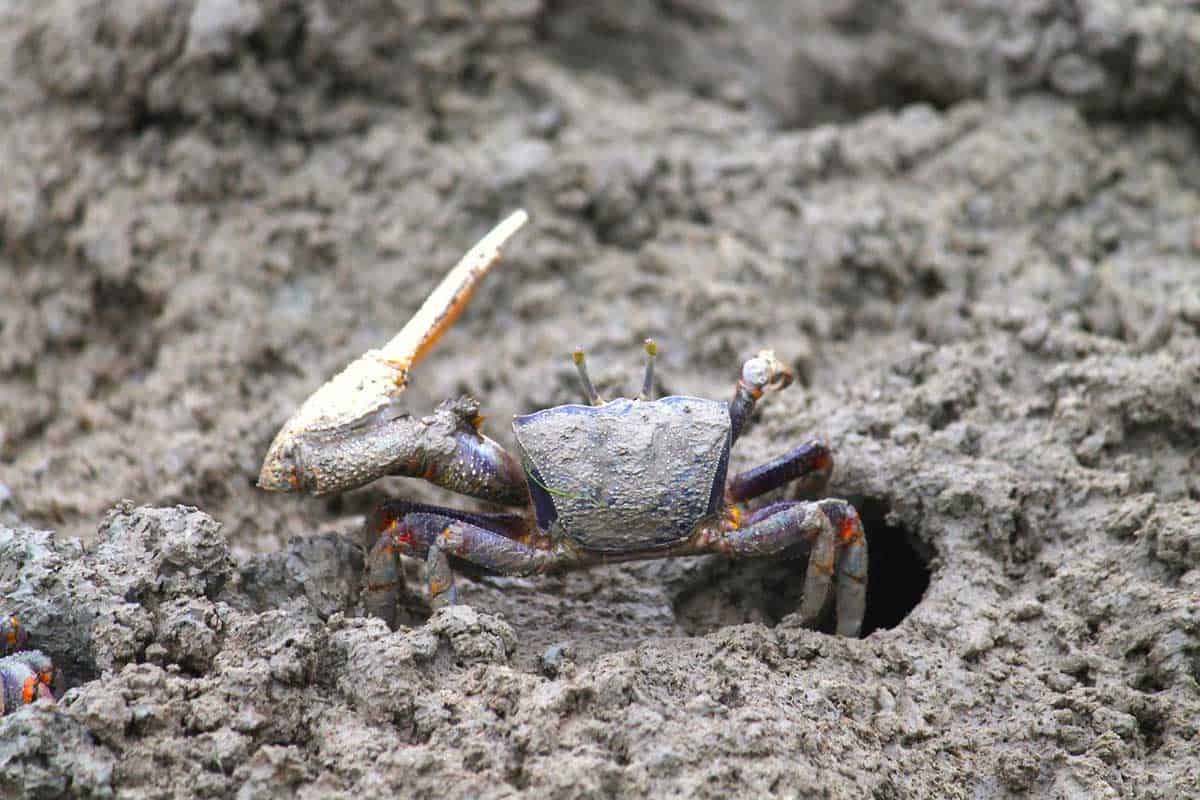 Habitats provide food and shelter to the animals that inhabit them. There are many different types of habitats, each with its own variety of species, but this article focuses on one in particular: mud. Mud isn’t just for spa treatments. It hosts an incredible variety of wildlife. This article showcases several species of animals that live in mud.

What is a mud habitat?

Mud is the result of mixing earth and water. Muddy habitats can be constantly or occasionally covered by water. These habitats form in coastal regions when the tides deposit silt and clay, leaving large flats of soft, wet mud.

These areas are often referred to as mud flats. While these mud flats may look barren and lifeless, but looks can be deceiving. Mud is home to a plethora of different wildlife.

Animals That Live In Mud

These small crustaceans are named for the large claw found on the males. The males carry their claws in front of their bodies and move them back and forth in much the same way as a person playing the fiddle. They range in color from tan to brown, and a fully grown fiddler crab is around 2-3 inches in size. The males are larger and heavier than the females.

Their lifespan is about two years in the wild. Fiddler crabs burrow into the soft mud and feed on organic matter such as algae, bacteria, and decaying plants. When ready to mate, the male fiddler crab digs a burrow and stands next to it, waiting for a female to walk by. If the female is interested, she will stare at the male causing him to run towards her and run back to his burrow.

She will follow him inside his burrow if she decides to mate with him. While inside the burrow, the female incubates her eggs for two weeks before returning to the surface to release the eggs into the water. Muddy habitats are an essential source of food, shelter, and breeding ground for these special creatures.

The red mud worm, or Notomastus tenuis, is a segmented worm found in mud habitats. These small worms are about 1 inch long and ¼ inch wide. These cylindrical creatures have two distinct long, coiled organs called palps protruding from their heads.

These palps are used to find and collect food. Mud worms also have bristles along their sides which aid in swimming and provide extra traction when crawling in the mud.

Mud worms tend to live together in large colonies, and it is not uncommon to find up to 50 worms per square inch of mud. When the worms eat, they collect bits of mud, separate the food, and then excrete what is left, forming layers of sediment around the colonies that can measure several inches deep. These worms thrive in muddy environments and are extremely tolerant of pollutants such as oil.

A mudskipper is a unique fish that lives on land and water. These strange creatures breathe using gills but can also breathe by absorbing oxygen through their skin and the linings of their mouths and throats.

As their name suggests, they can move across land using a series of jumps or skips. They also utilize their pectoral fins to move over land, almost like walking. These fish typically live in areas only covered by water during high tide.

They spend the rest of their time on the mud, entering their wet burrows if they get too dry. Mudskipper feed on small animals and algae found in the mud. These fascinating, amphibious fish are perfectly designed for life in the mud.

Littleneck Clams are part of the mollusk family and can be found buried 4 to 6 inches into the muddy shores. They grow up to three and a half inches long and can live to be 14 years old.

These bivalves may be grey or cream in color and can display various patterns. Littleneck Clams have two highly-specialized gills on each side, and these gills filter out suspended food particles from the water during high tide. Due to human consumption, populations of these clams are diminishing, but conservation efforts are being made to save them.

Otherwise known as Mud Lobsters, ghost shrimp get their name from their white, translucent appearance. These crustaceans burrow into the mud on the shores of lagoons or estuaries. As adults, they grow to be between 2.2 and 5.7 inches long.

As they burrow into the mud, they find plankton, algae, and other organic matter to eat. From the surface, a ghost shrimp’s burrow looks like a little volcano on top of the mud.

These small creatures of an essential part of the muddy ecosystem because they drive oxygen into the mud as they burrow, which helps break down organic matter ad provide more food to other creatures.

These large members of the mollusk family can grow to almost 8 inches and weigh up to six and a half pounds! If that’s not impressive enough, their lifespan can be up to 168 years.

Geoducks are the largest burrowing clams in the world. The unique thing about these clams is that their valves are not big enough to conceal their necks, which always protrude out.

They live their lives buried two to three feet into the mud, using their giant neck to siphon out plankton. These impressive specimens may be unattractive but are an important part of the muddy ecosystem.