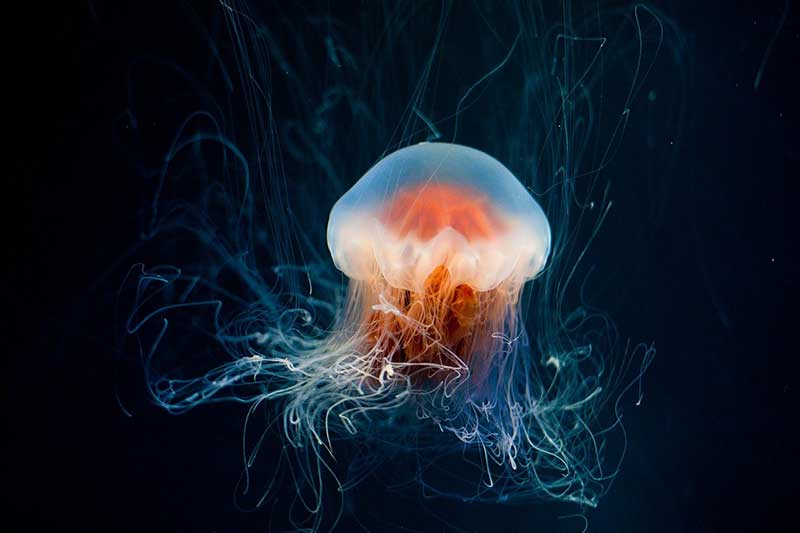 Animals that glow in the dark are incredible feats of nature. Insects, fish, and even some mammals have developed bioluminescence and fluorescence, though science has yet to figure out some of the ecological benefits to these animals’ glow. Whatever the reason, there is no denying the beauty of these animals and their natural light-emitting powers.

Animals That Glow in the Dark

In this article, we will take a look at 8 animals that glow in the dark. From all corners of the earth and sea, these creatures are bound to blow you away.

Short-tailed opossums are native to the rainforests of Paraguay, Brazil, Bolivia, and Argentina. They feed on small rodents, frogs, lizards, insects, and fruit.

Recently it was discovered that short-tailed opossums fluoresce under black light. It’s not known exactly why opossums developed this trait, but when exposed to black lights they not only glow, they are hot pink!

Gray short-tailed opossums are commonly found in the pet trade in the US and Europe. They are relatively easy to care for and can make great pets with proper socialization.

There are over 2000 species of fireflies in the world. Also commonly called lightning bugs, these insects have sparked many myths and children’s stories, as well as a popular song by a band called Owl City.

These insects are able to glow, or be bioluminescent, thanks to a chemical reaction in their bodies. These nocturnal creatures use their ability to glow as a way to communicate with other fireflies and as a way to warn off predators.

Sadly, fireflies are not nearly as prevalent as they were 20 years ago. It’s thought that this is due in part to habitat loss and partly due to light pollution keeping them from effectively communicating with each other.

There are over 260 species of anglerfish and all of them live in the deep sea. Here it is so dark that anglerfish have a hard time seeing each other and seeing their prey.

Anglerfish are carnivorous and while they do lure in fish with their lights and are known to catch live fish, the main part of their diet is dead matter that has sunken to the bottom of the ocean. Things like dead fish, sea mammals, and even birds often sink down to the anglers that feast on them.

Strangely, only female anglerfish have a bioluminescent bauble and they use it to attract mates. When the male anglerfish finds a female he believes to be suitable, he will attach himself to her and live on her until she is ready to mate.

The smallest species of shark in the world is the dwarf lantern shark. These tiny sharks are smaller than a human hand and max out at 8 inches.

Dwarf lantern sharks have photophores on their bellies that help them to be bioluminescent. The light they produce helps them to attract small fish and shrimp that they feed on. It is also thought to help them avoid predation from larger deep-sea animals.

These lantern sharks are found off the coasts of South America and are usually found around 900-1200 feet deep in the ocean. Due to their native habitat being hard to explore, little more is known about these reclusive sharks.

Firefly squid, also known as the sparkling enope squid, is found in the western Pacific Ocean between 600-1200 feet depths. They are known to glow bright blue when they are disturbed.

The firefly squid is named after firefly insects and it produces light in much the same way. These squid are nocturnal. They hunt at night at around 600 feet and then drop back down to 1200 feet during the day to rest. It’s likely they feel safer in the deeper waters during the day when there are fewer fish around to catch them.

The firefly squid is considered a delicacy in Japan, but they are only attainable once per year when they come to the surface to breed. From March to May, these squid will surface to lay their eggs in Toyama Bay, breeding completes their lifecycle, and afterward, they beach themselves to die. That is when the Japanese harvest them and are able to enjoy their delicate meat.

The Tasmanian devil is native to the island of Tasmania and New South Wales. As the largest living carnivorous marsupials, these animals have very few predators. They feed mainly on small rodents, insects, and fish, frogs, and birds.

While Tasmanian devils were thought to be completely solitary, recent research has shown that they do frequently congregate to share carrion and may have more intricate social structures than originally thought. They also come together once per year to breed, after which the female will give birth to 2-4 pups.

The skin around the Tasmanian devil’s mouth, eyes, and ears is able to absorb ultraviolet light and emit it as visible blue light. It is not known why the devil evolved such a trait, but scientists think it’s pretty nifty.

It is unknown why these animals produce their bright nighttime colors, but this phenomenon has been documented on both captive and wild specimens. It also seems each animal displays the colors uniquely with only part of its back displaying the glow and none of its stomach.

GloFish are fish that have been genetically modified to fluoresce under certain lighting. There are currently several species including danios, tetras, barbs, rainbow sharks, and bettas, with new species being added regularly.

You may also like:  17 Animals with 3 Letter Names (Pictures and Facts)

While these fish aren’t bioluminescent or glow in the dark, they do fluoresce under specific lighting like some of the other animals on this list.

While many fish hobbyists find these fish to be distasteful, they are actually pretty interesting and have filled a niche in the market that used to be filled with painted glassfish. Painted glassfish are a tetra that have historically had color injected into their skin to make them colorful. Glofish, on the other hand have a really interesting creation story.

GloFish were created by injecting the DNA of jellyfish or coral, depending on the color, into the individual eggs of the fish. The color starts out very mottled and hard to see, but over generations of selective breeding, the fish eventually express color all over their body.