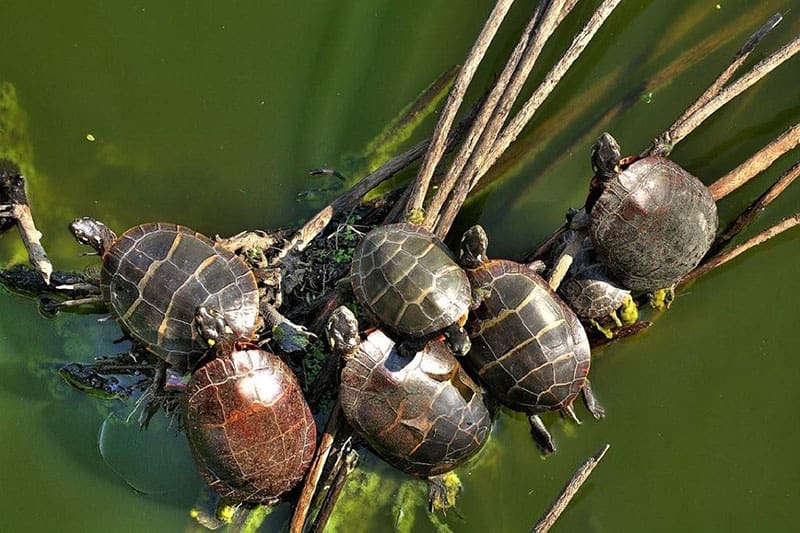 Turtles are among the oldest and most primitive groups of reptiles, dating back all the way to the dinosaurs. They’re found in a wide variety of environments and live all over the world in almost every type of climate. Here are 10 species of turtles in Georgia you’re likely to encounter.

10 awesome species of turtles in Georgia

The Red-eared Slider is native to the Southern United States and northern Mexico. It gets its name from the small red stripe around its ears and from its ability to slide quickly off rocks and logs into the water. It’s the most common turtle to be kept as a pet, both in the U.S. and throughout the world, and therefore is the most traded turtle. The Red-eared Slider is actually an invasive species in places other than the South, as it gets released after being a pet and goes on to outcompete native species.

In Georgia, the Red-eared Slider is commonly found in areas with a source of still, warm water. This includes ponds, lakes, swamps, creeks, and streams. They’re semi-aquatic, meaning they survive in both the water and on land and both are necessary for the turtle’s well being. It’s common to see them sunbathing in a group or even on top of one another and, should you get too close, they’ll slide off their perch and back into the water with a splash.

The Eastern Box Turtle, as inferred from its name, is prevalent all along the Eastern United States. They’re a terrestrial turtle, in fact they’re the second most terrestrial turtle of the region second to the Gopher Tortoise. This means they spend the majority of their lives traveling overland and not being restricted by finding a water source. They’re found in a variety of environments, but they are most common in the open hardwood forests of the Piedmont. 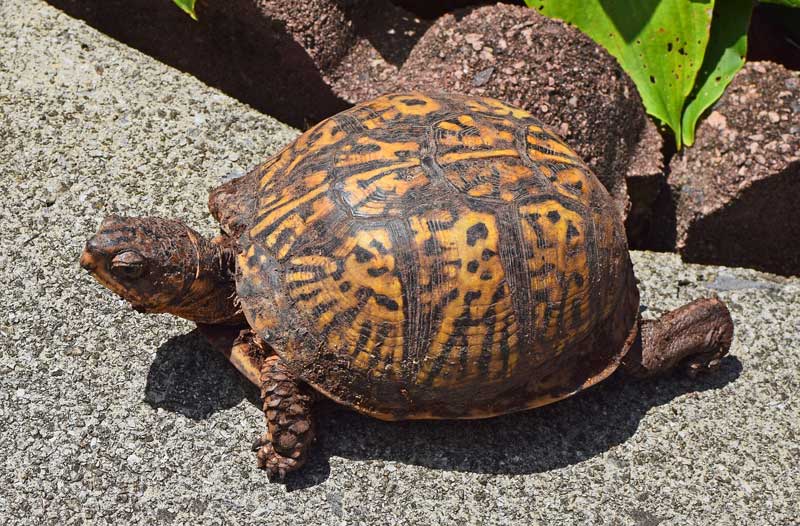 Within the Piedmont, you’re most likely to find an Eastern Box Turtle after the summer rainstorms. With the coming of fall also comes their mating season where the males will actively seek out females. They’re often found along field or wetland edges and are commonly seen soaking in puddles and streams. An interesting fun fact is that you can easily tell the sex of one of these turtles by their eye color! The males have red eyes, and the females have yellow-brown eyes and are generally larger.

The Common Snapping Turtle is able to inhabit almost any body of freshwater, including rivers, lakes, marshes, swamps, ponds, and streams. They can be found from Canada to the Gulf of Mexico, and they occupy all areas of Georgia. The Common Snapping Turtle prefers bodies of water with a soft mud or sand bottom, aquatic vegetation, and plenty of submerged tree trunks or brush.

You may also like:  Owls in Nevada (10 Species With Pictures)

In Georgia, it’s common for locals to trap and subsequently eat snapping turtle – it’s considered to be a local delicacy. They can be found year-round in any of the above-mentioned habitats with them most active between April and November. It resembles the more well-known Alligator Snapping Turtle but doesn’t have the same bite strength, is much smaller, and much less of a danger to humans.

They live in what’s called the Longleaf Pine Savannah, which is the area with longleaf pines in Southern Georgia. The Gopher Tortoise is a good signifier of the health of the land it’s on, as they require deep, well-drained soils to burrow in as well as an open understory that provides sunny spots for the turtle. The Gopher Tortoise is also very important for spreading seeds from local plants, thereby stimulating the environment even more.

Scientific name: Trionyx ferox
Length: Females can reach almost 24 inches, but the males tend to be half that size at 12 inches
Weight: Females are usually double the weight of the males, weighing in on average at 14.7 pounds (but the record weight documented has been 96 pounds)

These turtles are more carnivorous than most turtles as well. Along with their diet of snails and fish, they have also been known to eat waterfowl such as ducks and even smaller herons. Like all cold-blooded reptiles, they can be often seen basking on sunny days and are active year-round, although when the weather gets colder they tend to stay more out of sight in their lakes. If the weather gets cold enough, they’ll go into a state called brumation where their metabolism slows down and they’ll only surface every couple of hours or so.

The Eastern River Cooter ranges from Eastern Virginia to Eastern Georgia. It’s found within springs, lakes,  swamps, and ponds in the Piedmont and Coastal plain. All it requires is clear water and substantial vegetation.

Interestingly, it’s believed the name comes from the African word “kuta”, which means “turtle” in Bambara and Malinke, which both were languages brought to America by African slaves. The River Cooter will eat whatever it can get its mouth around, but it isn’t able to swallow unless its in the water. Its diet consists of mostly aquatic plants, but it’s been known to wander out of the water to find a bug or worm and then return to the water to swallow it.

Painted Turtles are mostly found within the Piedmont region of Georgia, but can also be found further inland in the Blue Ridge Mountains. They prefer aquatic habitats with vegetation and muddy bottoms, such as slow-moving rivers, lakes, and often farm ponds and seasonal wetlands. These turtles are omnivores with their hatchlings being more carnivorous the younger they are. These young can grow incredibly quickly, usually doubling in size during their first growing season to being a full-sized adult.

The Bog Turtle is the smallest turtle species in North America. It can be identified not just by its tiny size, but it also has a distinctive orange, yellow, or red blotch on each side of the head behind the eye.

Bog Turtles are primarily active during the spring, early summer, and early fall where they will feed on a wide variety of prey. Insects, earthworms, snails, frogs, watersnakes, berries, and carrion are all part of the Bog Turtle diet.

Because this animal is so small, it can be very elusive and not much is known about it. It inhabits the bogs of Georgia and prefer slowly flowing spring creeks and seepages within low mountain valleys. The presence of soft, deep, mucky organic soil and open wet areas with shallow water is a prerequisite for this turtle’s inhabitation.

The Loggerhead Sea Turtle is an aquatic turtle found most commonly on Tybee Island in Georgia. They begin their lives as hatchlings in the open ocean and are thought to spend the first ten years of their life just drifting with the currents along with mats of sargassum seaweed. Once they reach sexual maturity, usually around 30 years old, they’ll return to the beaches where they hatched from in order to start their own family. Within this time, the hatchling’s weight will have increased by more than 6,000 times.

This turtle is listed as Endangered and faces direct threats from humans. Their home beaches are very important to these turtles, as if their original home is destroyed they’ll refuse to go anywhere else to lay their eggs. These majestic animals will travel thousands of miles across open ocean to return to these nesting grounds where the females can lay over a hundred eggs in a clutch in the months between May and October.

The Leatherback Sea turtle is the largest of all living turtles. It’s also one of the largest living reptiles and is surpassed only by some species of crocodiles. The largest Leatherback ever recorded weighed 2,016 pounds. They get their name from the smooth, rubbery skin that stretches over their back in place of a shell. Because of this feature, Leatherbacks can dive to depths over 1,000 meters in search of food without the enormous pressure crushing them.

You may also like:  The 11 Types of Owls in Wisconsin (Pics)

Like the Loggerhead, the Leatherback Sea Turtle comes to the coasts of Georgia in order to lay its eggs before returning to the ocean. They feed almost exclusively on jellyfish with their delicate scissor-like jaws, plus they have backward-pointing spines that help to swallow the slippery invertebrates. These turtles have the unique ability to slightly raise their own body temperature, which allows them to range as far north as Greenland. Because they spend the majority of their life out in the open ocean, relatively little is known about the rest of the biology of this mysterious turtle.