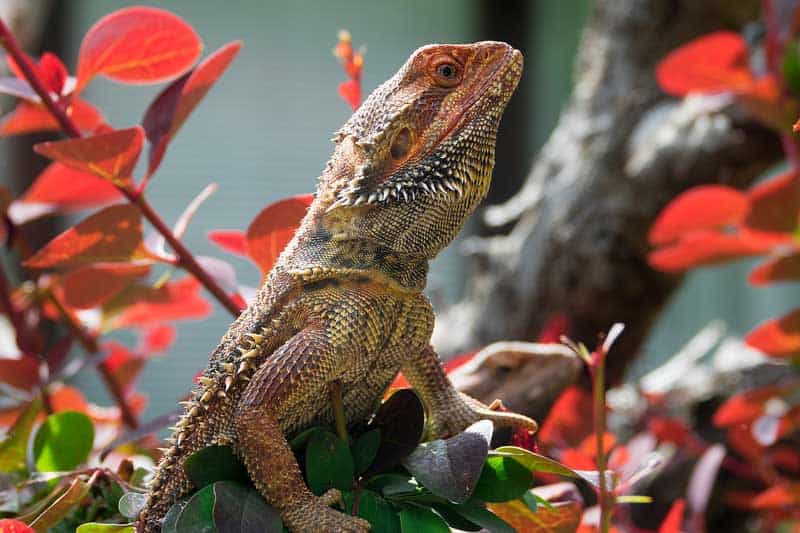 Bearded Dragons are some of the most popular reptile pets for good reason. They are friendly, gregarious, and often enjoy being handled. However, bearded dragons do tend to have digestive problems. A poor diet can lead to their digestive system being backed up and them becoming impacted or constipated.  Below are 10 possible signs your bearded dragon is constipated or impacted.

10 Signs Your Bearded Dragon is Constipated

Impaction is a blockage in the intestine caused by an inorganic substance. Since bearded dragons love to eat objects in their surroundings, these are common. Materials that cause impaction include sand, commercial substrates, shells, and gravel.

Constipation is a blockage in the intestine caused by aggregation of an organic, or digestible, bit of food or object. This blockage is organic and will break down in the wild. This article discusses constipation primarily, but many of the symptoms on this list are also signs of impaction.

Read on to learn more about how to identify and prevent digestive issues from occurring in your beardie’s life.

1. They have gone at least 14 days without a bowel movement

The frequency of a bearded dragon’s bowel movements depends on its age. Baby beardies defecate as often as once per day, while adults defecate every 7 to 10 days.

If you notice your adult beardie hasn’t used the toilet in two weeks, it’s a good idea to keep a closer eye on it. It may be suffering from constipation or even impaction in its intestines.

2. They are refusing to eat

When they have an upset stomach, bearded dragons behave like most animals: they refuse to eat. Your bearded dragon with a constipation issue refuses food because it doesn’t want to add to the existing food already in its digestive system.

This situation is very obvious when the beardie refuses live prey. If your beardie starts to turn its nose up at food, we recommend taking a look at it to see if there are any potential health problems.

In some situations, a beardie with a blocked large intestine will eat food, only to regurgitate it later. This comes from a mismatch in the communication between the brain and the stomach.

The beardie feels hungry, eats food, but it is too much for the digestive system, which does the only thing it knows how to do: send the food back up the esophagus. Bearded dragons with this issue throw their food back up once it reaches a full stomach that can’t absorb any more nutrients.

4. They are pale and listless

A constipated or impacted bearded dragon grows pale and listless. They have little energy to interact with enrichment toys in their enclosures, much spend time with their owners.

Having pale skin indicates that the lizard doesn’t have enough blood flow to the rest of its body. In cases of gastrointestinal problems, most of the body’s blood gathers around the stomach and intestine, leaving the rest of the body without enough oxygen.

This may be a reason why your impacted beardie is limp, not very responsive, or pale.

You may also like:  Do Snakes Have Tails? (Explained)

5. Their body is swollen

The stomach area tends to distend – get bigger – when a bearded dragon gets constipated. The food accumulates somewhere since it can’t exit the body.

Usually a bearded dragon will swell around the entire abdomen if it is constipated. The stomach is usually hard to the touch. Reptiles with swollen stomachs usually experience pain when being handled. It’s recommended to give your bearded dragon space in this situation and handle them only when strictly necessary, such as when setting them into a hot water bath or taking them to the vet.

6. The area around the lower intestine and cloaca is swollen

A surefire way to identify a case of constipation in a bearded dragon is to not the state of the vent and the lower abdomen. If just these two areas are swollen, chances are it’s a case of GI upset.

Bearded dragons urinate and defecate out of a single exit, the ‘vent’ or ‘cloaca.’ If the area around here is swollen, it may be that there is an impassable amount of digested material caught up in the lower intestine, preventing the lizard from defecating.

7. There are visible bumps around their stomach area

Other cases of gastrointestinal distress focus more on intermediate parts of the bearded dragon’s intestine. A single fiber-rich meal might create undigestible chunks in a handful of spots throughout the digestive tract.

This situation may not be a serious as full swelling around the entire abdomen, but it is still uncomfortable for your bearded dragon.

In all the cases of swelling, try to introduce more water into the beardie’s diet. Mist them regularly and give them at least one bath of 30 minutes per week.

Why do bearded dragons have trouble using their back legs when in GI distress? Here’s why: unlike mammals, reptiles don’t have disks in between their spinal vertebrae to protect and cushion the spinal cord.

When swollen intestines press against their spine, they press against the spinal cord, causing the nerves to be pinched and not function properly. When the beardie can’t feel its legs, it is paralyzed temporarily until the digestive swelling subsides.

9. They are antisocial and don’t want to hang out

A lizard in pain is an antisocial lizard. When a bearded dragon is constipated, it can be very uncomfortable. They are more likely to hide in an enclosure and rebuff human contact.

You might be able to hold an ill animal, but they are certainly less likely to interact with you. A constipated bearded dragon wants nothing more than to pass the blockage, not spend time communicating with its handler.

10. There is a bump along the spine

Just as the intestines can press along the edge of the spinal column, they can also force the vertebrae to bulge outward. If your beardie appears listless, bloated, with bad hind leg function, and strange bumps along the spine, it’s time to take it to the vet. That’s a clear case of intestinal blockage.