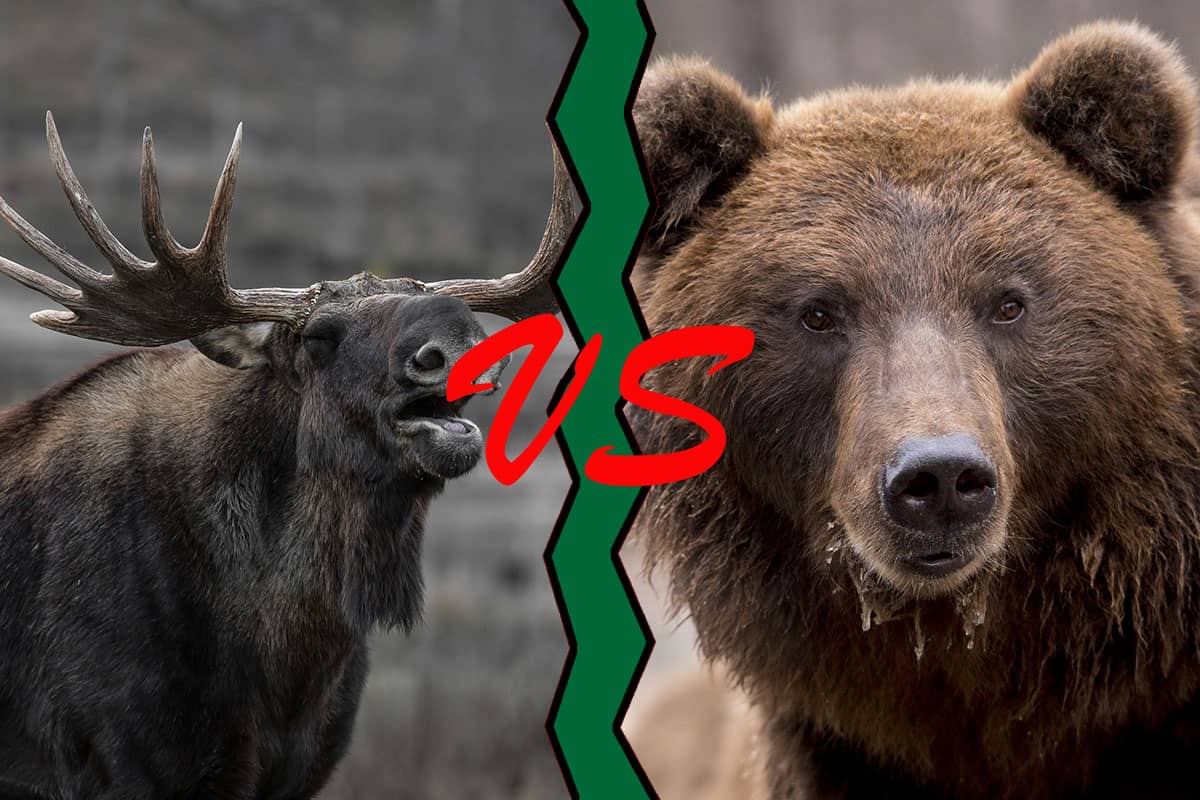 Both moose and bear are two of the largest land animals in the Americas. So, what happens when when we compare a moose vs bear… how do they stack up against each other? In this article we’ll compare these two massive mammals in a variety of ways so we can see how they’re both different and similar.

But first, let’s learn a bit about each of these animals.

What is a moose?

Moose, or Alces alces, are members of the deer family. These large mammals can stand up to 7 feet tall at the shoulder and weigh more than 1,800 pounds. From nose to tail, they grow to be, on average, 7 to 10 feet.

Moose have an herbivorous diet that consists of leaves, bark, and twigs from trees and shrubs. Because of their extensive height, it is difficult for them to graze on grass like their deer relatives. Their lifespan ranges from 15 to 25 years.

A male moose, called a bull, grows large antlers each spring for mating season. When competing for a mate, they use these antlers for fighting. They drop their antlers at the end of each mating season and regrow them the following spring.

What is a bear?

There are eight species of bear in the world, but only three can be found in the United States:

Black bears are the most common type of bear in the United States. Black bears are omnivores, meaning they will eat just about anything. These bears spend the winter months inside dens to avoid the cold weather and survive the lack of food.

Grizzly bears are larger than black bears, and while they are also omnivores, they have longer, sharper claws to help them more easily dig for food and catch prey. Like Black bears, Grizzly bears spend the winter months hibernating inside dens.

Polar bears are unique members of the bear family. They are the largest of the bear species and have black skin and white fur to help them survive in colder climates. They also have webbed paws that help them swim.

Moose Vs Bear: How they stack up

You may also like:  Moose Population by State (Estimates and Info)

Moose have large antlers and of course bears do not. A moose’s antlers can be 5-6 feet across and weigh 30-40 pounds making them the largest antlers of any animal in North America.

While a bear may stand on its hind legs and make itself appear larger than it is, when both animals are walking on 4 legs the moose is going to be a much taller animal. We’ll discuss more about which animal is bigger next.

The question of which is bigger between a bear and a moose depends on which bear is being used for comparison. An adult Black bear can grow to be 3 feet tall at the shoulders, 7 feet long from snout to tail, and weigh up to 350 pounds.

By comparison, a moose can grow 7 feet tall at the shoulder, 10 feet in length, and up to 1800 pounds. This is much larger than the Black bear and the Grizzly bear.

The only bear that comes close to this size is the Polar bear. When comparing these two animals, the Moose is taller than a Polar bear, but their weight is very comparable.

Moose are only found in the northern regions of the United States and Canada, and they only reside in places with seasonal snow cover. Each piece of fur is actually hollow to help them hold in heat and stay warm in cold climates.

It is a little difficult to compare a bear’s strength vs. a moose’s because they use their strength in different ways. A Black bear has a bite force of 800 pounds per square inch or PSI and a swipe force of up to 560 pounds.

Though a Moose can bite, it doesn’t pose much danger, and their bite force isn’t even worth comparing to a bear. A Moose does have a powerful kick, though it has not been studied at length to determine exactly how strong this kick is.

Their strong legs make them very good swimmers, and they can run up to 35 miles per hour. Overall, a bear is stronger than a moose in bite strength and swipe force.

Which would win in a fight?

While moose are formative animals and can have antlers that spread up to six feet wide, they are no match for some species of bear. If a Moose were to go head-to-head with a Black bear, the Black bear would stand the risk of being kicked or trampled.

You may also like:  How Strong Are Elephants? (Examples)

The significantly larger Moose would likely seriously injure or kill the bear. However, if a Moose came face-to-face with a large Grizzly or Polar bear, the Moose would probably lose. The long, sharp claws and teeth of these predators would pose a major threat to the Moose.

While the Moose may be able to get a kick in here and there, the Grizzly or Polar bear would almost certainly be the victor. The only chance a Moose would have in this fight would be to inflict a mortal wound with its antlers very quickly before the bear could use its powerful jaws or strong claws.

Moose are enormous animals. They may not be as strong as bears, but when it comes to size, they are much larger than most species of bear. The Polar bear is the only bear that is comparable in size.

Moose are herbivores, while Bears are omnivores. Moose only live in areas with seasonal snow cover, but some Black bears live in areas that never or rarely snow. While Moose and Bears are both mammals, they have distinct differences that make them unique members of the animal kingdom.