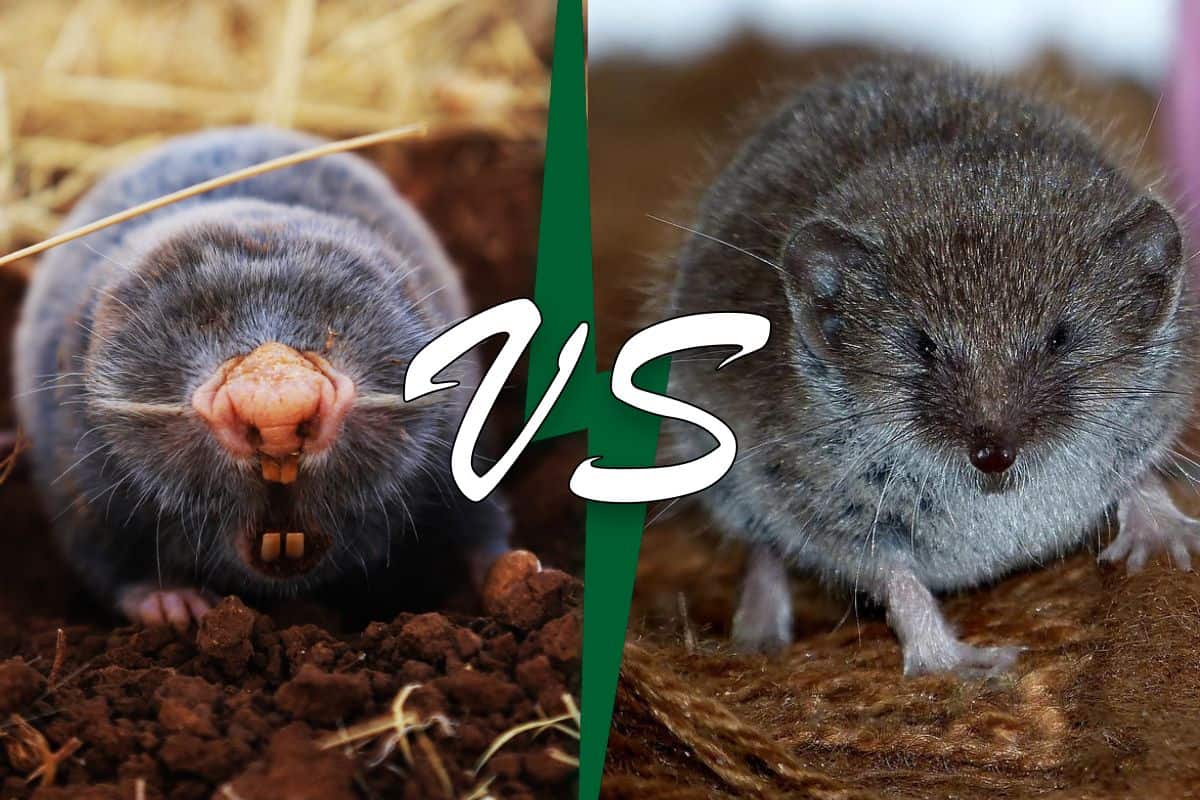 Moles and shrews are two closely related creatures that share many of the same characteristics. But that doesn’t mean there are not ways to tell these two animals apart. Let’s take a look at the mole vs shrew and learn a little more about what makes these animals different.

Moles and shrews are sometimes confused with one another, and for good reasons. Both of these animals are rodents with long pointed snouts and neither one hibernates during the winter. Additionally, moles and shrews are found worldwide in various climates.

There are, however, several differences between a mole vs shrew, including size and habitat. Keep reading to find out what these differences are.

The size of the animal is a big giveaway to whether it is a mole or a shrew, since moles are a bit larger than a shrew. Depending on the species, moles range in size from 4 to 7 inches and between 1 and 2 ounces. The shrew, however, is much smaller, measuring under 3 inches long and weighing 5 to 14 grams.

One of the most telling signs that you are looking at a mole is that it’s front feet are enlarged. This is because moles use their large front claws and feet to dig extensive and impressive underground tunnels. Shrews don’t have enlarged feet, and instead are equipped with feet and toes that look similar to other rodents.

Despite what some people think, moles do in fact have eyes and they can see, just not that well. However, their eyes are much smaller than a shrew’s. When looking at a mole, it may appear that it doesn’t even have eyes, while the shrew’s eyes, while small, are still visible.

Moles have short dark gray to black velvety fur that lies in one direction. This allows the mole to move underground with little to no resistance.

The shrew also has short fur but it doesn’t have the same velvet-like texture to it. Shrew fur is also not as dark and instead features hues of brown with a reddish or grayish tint.

Moles are most commonly found outdoors, living in underground tunnels. They typically do not invade homes and buildings.

Shrews, on the other hand, live in a wide array of habitats, and are not against trying to make their way into residential areas. With that said, however, shrews sometimes reuse old mole tunnels, so just because you see a creature emerge from a small hole in the ground doesn’t necessarily mean it is a mole.

Moles are good at what they do, and know they can quickly become prey if they spend time above ground. Because of this, moles usually stay underground, and are not as commonly seen as shrews. If you see a rodent-like animal with a long pointy snout, then it’s probably a shrew.

While both moles and shrews are ominorves that feed on insects, the mole will also regularly consume earthworms, centipedes, and grubs. Shrews like to feast on things they can find above ground, such as crickets, spiders, snails, and even seeds. They have also been known to eat plants.

You may also like:  30 Types of Monkeys (With Pictures)

Gardeners often see mice-like creatures running through their garden, with some of them leaving destruction behind. If you find small holes in your yard, then you most likely have a mole on your hands.

Shrews are not diggers and don’t create underground tunnels that can wreck havoc on lawns. Moles, however, are notorious diggers that can quickly turn your once pristine yard into the surface of a crater.

Even though moles are known for the extensive damage they can do to yards, they are not aggressive towards humans or other animals. If you or your pet encounter a mole, they will do everything in their power to get out of sight.

Shrews, however, are a bit more aggressive and will even attack other rodents. While both animals have sharp teeth and have the potential to bite, shrews are more likely to have a chip on their shoulder.

Another difference between the mole vs shrew is when the animal is active. Moles are most active during noon and midnight, although they move around throughout the entire day and night.

Shrews, however, are mostly nocturnal but can sometimes come out during the day, depending on the species and environment.

Shrews are prey to many different animals, including hawks, coyotes, and even owls, and they have two interesting defense mechanisms that moles do not share. When the shrew feels threatened, it will release a foul smelling odor from its scent glands. This unpleasant aroma can sometimes stop an attack before it even begins.

Shrews also have venomous salivary glands that can immobilize prey. This toxin is how a shrew is able to take on prey that is bigger than them.