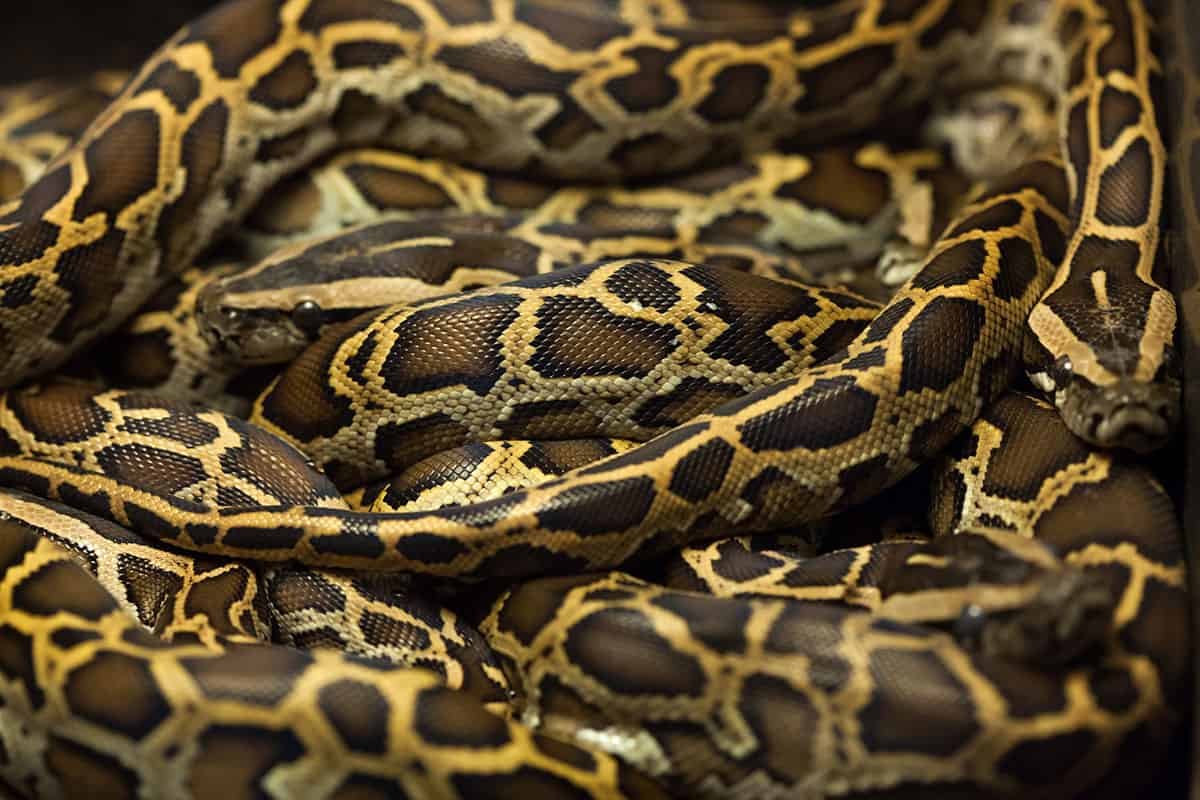 This is due to the fact that they eat many native species and have also been known to spread non-native parasites to native species in Florida. As a way to lessen their impact, the state of Florida has allowed for people to hunt Burmese pythons.

Do you need a license to hunt pythons in Florida?

No, you do not need a license to hunt pythons in Florida. However, there are certain rules and regulations around hunting pythons that those interested in hunting them need to be aware of.

Can anyone hunt pythons in Florida?

Yes, the Florida Fish and Wildlife Commission (FWC) encourages the removal of invasive pythons by those who find them. However, removal is limited to private lands (so long as you have the permission of the landowner) and 25 different public land areas, which can be found on the FWC website.

For hunting pythons outside of these areas, you would need a permit. Additionally, any pythons hunted in the allowed areas need to be killed or euthanized humanely. Under no circumstances are hunters allowed to transport live pythons.

On public lands, the use of firearms or traps is prohibited, meaning that pythons need to be hand captured or captured using hooks, tongs or noose poles and then safely euthanized.

You can get paid to hunt pythons in Florida

In addition to letting the public help hunt and remove invasive pythons, the state of Florida has also started paying hunters, also known as python contractors to hunt pythons. These contractors are paid hourly for their effort and are also paid for each python that is removed.

Python contractors are permitted to hunt in areas where most people cannot. Python contractors may be hired by the South Florida Water Management District (SFWMD) or FWC. Like any other job, python contractors go through a hiring process and are required to complete several training sessions before starting.

Getting hired to hunt invasive pythons is not the only way to get paid hunting pythons in Florida though. Every year, FWC hosts a Python challenge, inviting both professional contract hunters and “novice” hunters to participate. Prizes for the different categories range from $750 to $2,500!

How much do python hunters get paid?

Python hunting has the potential to be lucrative if you are able to find many or very large pythons. But pythons are very hard to find and it can take hours, days or even weeks worth of searching before you find one!

Hourly, python contractors get paid $10-$15 depending on the area, for up to 10 hours per day. For each snake removed, contractors receive $50, and then an additional $25 per foot over four feet.

So for example, a python contractor could make $200 for removing a 10 foot snake, plus their hourly wage. Python contractors are also paid $200 for each active nest that they find.

While there is a lot of potential to make some decent money professionally hunting pythons, it takes a lot of hard work, patience, and hours put in to do so. Animals are unpredictable, and pythons are no different. The chances of finding a python often come down to the time of year, weather conditions, time of day, and sometimes just luck.

Due to the uncertainty of the job and the pay, many python contractors hunt pythons on the side while also working a “normal” job. There are also many retired people that get into the business of python hunting to pass the time and make a few extra bucks!

Is there a python hunting season in Florida?

Pythons can be hunted year round in Florida so long as they are in the permitted areas or on private land with landowner permission. However, for those wanting to participate in the Python Challenge, it typically happens in July.

Pythons can be found year round in South Florida. Pythons are nocturnal, so finding them on the move at night is typically your best bet. However, during the winter months when temperatures dip, Pythons can also be found basking during the day trying to warm up.

Pythons also mate in the winter, and when they mate they often form breeding balls or breeding aggregations, which means you could come across more than one in the same place!

On the other hand, pythons become more active during the hotter, wetter months after a heavy rain or storm. So while there is no set hunting season, there definitely are times of year when your chances of finding a python are better than others.

How to get paid for catching pythons in Florida

To make money catching pythons in Florida, you can apply to the Python Action Team Removing Invasive Constrictors (PATRIC) with FWC or the Python Elimination Program with the SFWMD.

To apply, you need to be at least 18 years old with a valid driver’s license and have no felonies or wildlife-related offenses on your record. You must also be willing to have your survey efforts tracked via a GPS app and be able to pass a background check.

Alternatively, you can choose to participate in the python challenge to compete against other hunters to win prize money. People from all over the United States come to Florida to compete!

Due to the devastating impacts Burmese pythons have had on the Florida Everglades, the state of Florida has gotten creative with removal efforts. This means that anybody is allowed to hunt pythons in Florida, so long as it is in the designated areas and is done so humanely. Not only that, but you can also make a living doing it! However, this isn’t without a lot of hard work.

Nonetheless, money aside, hunting pythons in Florida has shown to be an effective way to remove invasive pythons and helps to restore the amazing wildlife of the Florida Everglades.