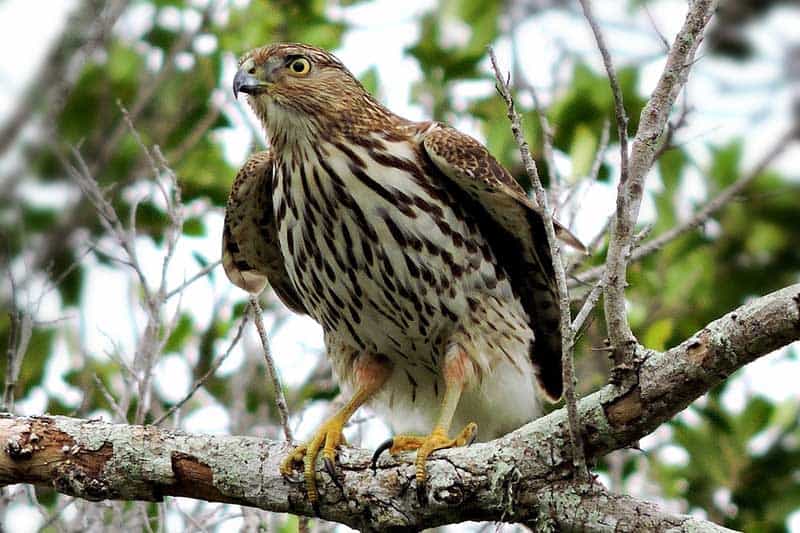 Whether you’re a bird enthusiast, resident to the state, or just simply curious, you may be wondering.. what types of hawks live in Oregon? In this article we’ll answer that very question and show you the 8 different hawks in Oregon, as well as learn a little bit about each species!

Let’s take a look at these amazing birds of prey!

The 8 Hawks in Oregon

The Swainson’s Hawk is a common species to see soaring on narrow wings across the open country of the Great Plains and the West, and all the way north into most of Oregon during the summer. They have one of the longest migrations of any American raptor, and will form flocks that contain more than ten thousand individual birds.

They’ll travel down to winter grounds in Argentina in the fall, not traveling along ridges or lake shores nearly as much as other hawks, preferring to soar over open country.

This hawk will actually change its diet depending on if they’re breeding or not. They’ll feed their chicks the typical “buteo” diet of rodents, rabbits, and reptiles, but when they aren’t currently breeding they’ll switch to a diet made up almost exclusively of insects. Grasshoppers and dragonflies are their preferred protein, and will even run after them when on the ground.

When catching larger prey like rodents, they’ll chase them down in flight with their wings held in a shallow V formation for maximum speed.

Rough-legged Hawks have a non-breeding range throughout all of Oregon. For most of the year they’re found in the open Arctic tundra, where they also breed. However, during the fall they migrate south to spend the winter in the much of the United States and southern Canada.

It’s during the winter they’re found in Oregon, though they tend to be harder to spot than other species. Their populations are pretty variable from year to year and often depend on how abundant lemmings, a major food source, are in the Arctic.

You may also like:  Bald Eagle Population (Estimates For Each State)

The Ferruginous Hawk is found in Eastern Oregon, and only during the breeding season. However there is a small pocket of these birds that winter in Southern Oregon, you can see the range map here.

It’s usually found flying over prairies, deserts, and the open range of the West, and is the largest of hawks in Oregon and in North America.

The Ferruginous Hawk gets the name “ferruginous” for its rusty shoulders and legs that are contrasted with bright white underparts. They have extreme patience, as they’ve been seen standing above prairie dog or ground squirrel burrows while waiting for prey to emerge. 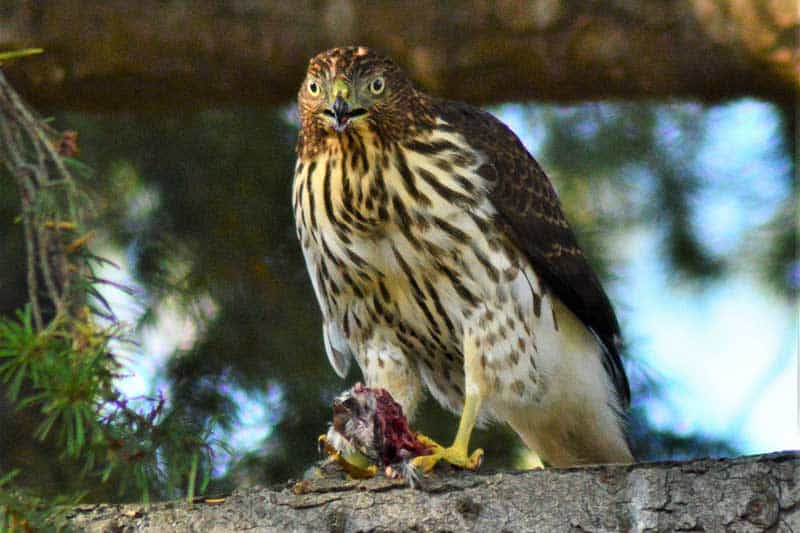 Cooper’s Hawks are very similar to the Sharp-shinned Hawks in looks with a steely blue back and wings and reddish barring on the belly, but Cooper’s are larger overall. It’s not uncommon for there to be discrepancies between large female sharpies and small male Cooper’s, since female hawks are larger than males. Cooper’s Hawks have a flatter head and rounded tail, which can help distinguish the two.

Cooper’s Hawks can be found throughout all of Oregon year-round.

Red-tailed Hawks are the most common hawks in North America and can be found in most parts of the country. These large hawks live in all of Oregon throughout the entire year. They can easily be recognized by their large size, red tails and shrill screams. Red-tailed Hawks are commonly seen perched high up on telephone wires or in treetops waiting for their next meal to appear.

They feed mostly on small to medium-sized mammals and aren’t regularly seen stalking bird feeders like a cooper’s or sharpie. A truly magnificent raptor and even though they are very common, they’re still a treat to spot.

The Northern Harrier is the only harrier variety of hawks indigenous to North America. Its breeding grounds range as far north as Canada, but it winters in more southern climates. The Northern Harrier can be found throughout Oregon, though portions of Central and Western Oregon may contain non-breeding populations of this species.

Northern Harriers are the most owl-like hawks in Oregon and North America. They rely heavily on their acute hearing as well as their excellent vision to hunt for prey.

The Sharp-shinned Hawk is the smallest of hawks in Oregon, as well as Canada and the rest of the United States. Though in some parts of Oregon, Swainson’s Hawks migrate to warmer climates in the winter. These little hawks are very widespread and can be found throughout North America. You can see their range map here to see what I mean.