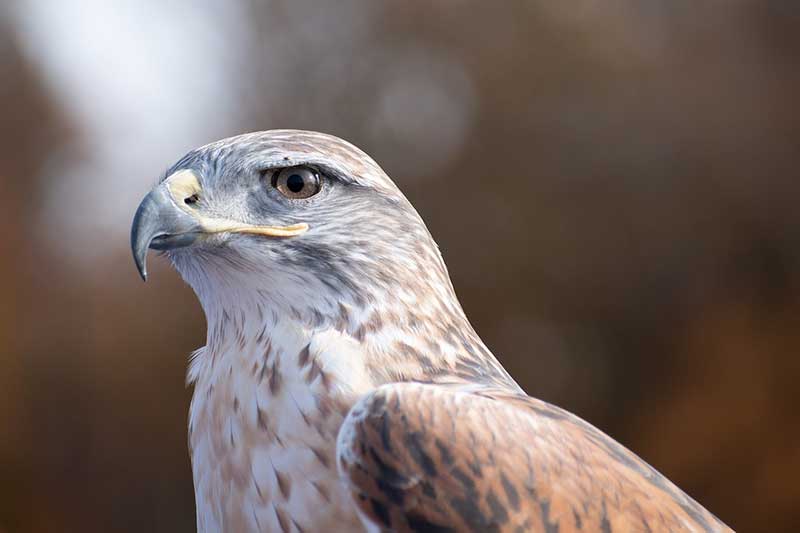 New Mexico is home to a diverse array of wildlife. This is partially due to the equally diverse landscape. New Mexico is not just arid dessert. It also has forested mountains as well as sweeping expanses of plains. This makes the state hospitable to a wide variety of animals, particularly birds. So in this article, we’ll be talking about the hawks in New Mexico.

Many species of hawk call New Mexico home for at least part of the year. Some hawks live there year-round. Others use it only as nesting grounds, or a winter home. Regardless of when and where each species is found in the state, they all make an appearance at some point during the year.

12 species of hawks in New Mexico

Now let’s take a closer look at the hawks of New Mexico.

Northern Harriers are part-time residents of  New Mexico. Their breeding populations are at the Northernmost part of North America, extending through Canada and into Alaska. During the winter they migrate south, with many of them establishing themselves in New Mexico and other southern states.

Northern Harriers hunt while flying, sweeping across open fields to spot prey. The main portion of the Northern Harrier’s diet is made up of small mammals and birds. They have also been seen going after larger prey. After capturing a larger animal, the Harrier will often kill it by drowning.

For the most part, Sharp-shinned Hawks migrate to New Mexico from the northern United States and Canada. There are small populations of Sharp-shinned hawks that have set up permanent residence in some parts of New Mexico. They make their residence in wooded areas, meaning in New Mexico they are most likely to be seen in mountain areas.

The Sharp-shinned Hawk is the smallest hawk in the United States and Canada. Sharp-shinned Hawks have nimble feet, which they use to grasp and pierce the flesh of prey. They are so good with their feet they have even been witnessed using their toes to maneuver prey out of traps.

Cooper’s Hawk is a permanent resident of New Mexico. There is a large population in Albuquerque, although they typically prefer the mountains and rural areas. The trees and food available in more populated areas make suburbs and cities more appealing to these usually shy hawks.

The Cooper’s Hawk is very similar in color and appearance to the Sharp-shinned Hawk but is larger. The majority of their diet is made up of other birds, and they have a habit of setting up residence near areas with backyard bird feeders.

You may also like:  Why Do Bearded Dragons Wave Their Arm?

Red-tailed Hawks can be found in New Mexico at any time of year. They are a common sight on telephone poles and are one of the most common birds of prey in the southwest. They make their homes in habitats of all types, from the desert and fields to parks. Provided it is open land, the Red-tailed hawk is comfortable in most places.

The Red-tailed Hawk has a very distinctive scream. It is so recognizable it is used in movies as the standard sound of any bird of prey. The Red-tailed Hawk is one of the largest raptors in North America, and can often be seen riding thermal updrafts.

Northern Goshawks live in New Mexico as both a permanent resident and a winter visitor. Lincoln National Forest is home to a breeding population of goshawks that is occasionally surveyed to track their numbers. They build their nests in ponderosa pines and aspens. The nesting places can often be found by bones and feathers left under the trees where they perch to pluck their prey.

The Common Black Hawk is a summer resident of New Mexico flying north from Mexico for the breeding season. They stay near water sources and build their nests in trees near the water’s edge.

The Common Black Hawk typically enjoys meals of crab and other small aquatic animals while in it’s permanent range, which includes large portions of coastal area. During their breeding season in New Mexico, they include amphibians, fish, and frogs since their territory is inland. 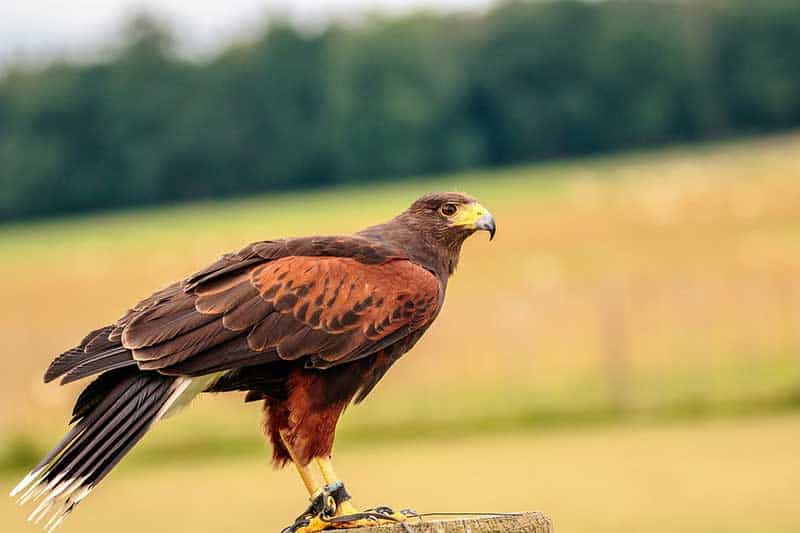 Harris’s Hawk has a permanent population in the South Eastern corner of New Mexico. Their preferred habitat is desert lowland and mesquite brushland. They have also begun to become more common in urban and suburban areas because of easier access to food and water.

Instead of being solitary hunters, Harris’s Hawk hunts in groups. They usually hunt in groups of at least two, ranging up to seven. Groups with more than two hawks have a better chance of survival than individuals. Harris’s Hawks have even been known to bring food to injured individuals who were part of their group.

Swainson’s Hawk spends its summers in North America including New Mexico. In winter the entire population makes its way south to Argentina. The large number of hawks migrating is an excellent opportunity to watch hawks along their migratory path. The flight of Swainson’s Hawk down to Argentina is one of the longest migrations of the North American birds of prey.

As chick Swainson’s hawks are treated to a diet of rodents and reptiles. Outside of the breeding season, adult Swainson’s hawks eat a diet made almost exclusively of insects. Dragonflies and Grasshoppers make up the majority of their insect-based meal plan.

The Broad-winged hawk is not a common sight in New Mexico. It can however occasionally be spotted during its migration south to Central America. Their migratory path may take Broad-winged Hawks across the very northeastern corner of the state.

Migrating Broad-winged Hawks eventually concentrate into large groups made up of multiple flocks, or kettles. This mass of hawks is a huge attraction for hawk watchers, who gather to watch what they call “the river of raptors.” During migration, the hawks will travel nearly 70 miles per day.

Zone-tailed hawks have a breeding population in New Mexico. They can be seen around mesas, waterways, and foothills, though they can be mistaken for turkey vultures due to their coloring and way of flying. Zone-tailed Hawks may have developed these characteristics to disguise themselves from potential prey. They are not common in the desert or in mountain ranges.

Zone-tailed hawks have started appearing very far north of their typical range. The number of hawks being spotted suggests that these sightings are the result of Zone-tailed Hawks expanding their range. This is a positive sign since the Zone-tailed hawk population is threatened. The breeding population in the United States is down to 2,000 hawks.

The Rough-legged Hawk hunts from a perch, swooping down to catch its prey. A non-breeding adult needs to eat about a quarter pound of food a day. A brood of two nestlings requires about 26 pounds of food in their first 40 days of life.

The Ferruginous Hawk winters in New Mexico, with some populations that make it their year round home. They spend their time in the Southwest in open plains or desert areas, hunting prairie dogs and other small mammals. Ferruginous Hawks can often be seen soaring, waiting to catch a ground squirrel or prairie dog unaware. They often gather in large groups of 5-10, and make a display of threatening each other.

These large hawks are one of only two species of hawks in the United States to have feathers all the way down there legs. The other is the Rough-legged Hawk. There are several color morphs of Ferruginous Hawks. The most common is the light morph, which has a white belly, and rest colored markings. The dark morph leans toward a chocolate brown, which also has signs of the rusty red marks that give the Ferruginous Hawk its name.

You may also like:  10 Types of Black Snakes in North Carolina