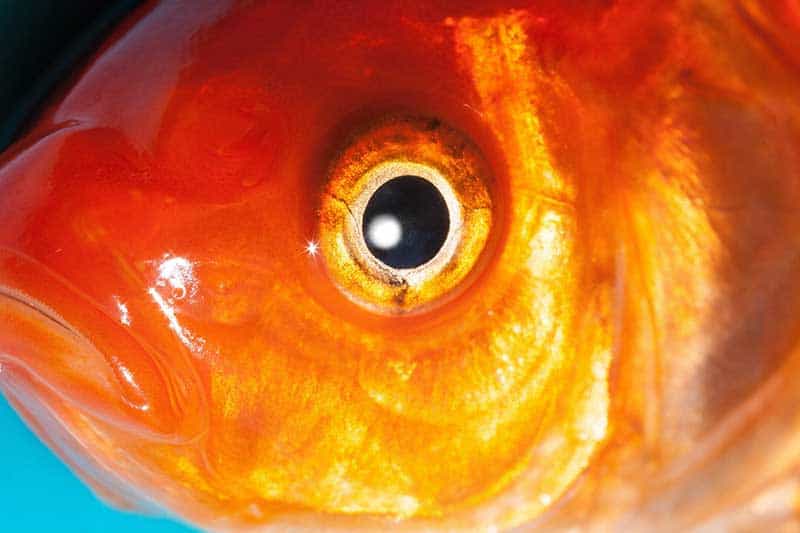 Fish are an incredibly diverse group of animals and there are close to 35,000 different species currently known! Unsurprisingly, there are many different traits and characteristics that make each species different from one another. One of these traits is eye size. In this article, we will list several species of fish with big eyes.

Fish have specialized eyes with a protective film that allows them to see underwater clearly, almost like built in goggles. Other than that, fish eyes are fairly similar to our own eyes and fish are capable of seeing colors and shades. Some fish however have larger eyes, which is oftentimes an adaptation to living in the deep sea where there’s less or virtually no light.

Let’s have a look at some of these big-eyed fish.

The taxonomic family Holocentridae is a group of tropical and subtropical carnivorous fish that live on coral reefs. They are typically a vibrant shade or orange or red and have large, dark eyes. While coral reefs are generally in shallow waters and therefore have plenty of light availability, Squirrel fish are nocturnal and need their eyesight to hunt in the night.

The Bigeye thresher shark is a type of cartilaginous fish. Thresher sharks are known for their incredibly long tails that they use to whip fish, which stuns them and allows for the shark to easily gobble them up. As the name would suggest, Bigeye thresher sharks have relatively large eyes in comparison to their body. These fish grow to be 11 and 13 feet in length, but have eyeballs that are up to four inches across.

As the name would suggest, Bigeye tuna have large eyes. Tuna in general are large fish, and the Bigeye tuna can grow to be over eight feet in length and 400 pounds! This species is known to travel between deep and shallow waters and will swim at different depths of the water column, which likely is made easier by their large eyes that allow them to see better when occupying deeper parts of the ocean.

Swordfish are an impressive species of fish, known for their incredibly long and sharp snout. They are expert hunters and can seemingly effortlessly track down and capture their prey which is made easier by their ability to travel and breakneck speeds. Equally as important for hunting though is their eyesight. In fact, swordfish have specialized muscles around their eyes that help to keep their large eyes warm and primed for spotting and seeking out prey.

The Porbeagle shark is much smaller than their relative, the Great White and typically does not exceed seven feet in length. Despite their smaller size, they are active and effective hunters and will chase down fish and cephalopods like squid. Because their prey is often found in deeper, darker waters, having large eyes helps the Porbeagle to hunt.

You may also like:  12 Incredible Animals That Use Tools (with Pictures!)

Telescope goldfish have large eyes, but not for the same reasons that most of the fish on this list have large eyes. The large protruding eyes of the Telescope goldfish are actually a result of naturally occurring and fast growing brain tumors that push their eyes out. These tumors are not believed to affect the daily life activities of a goldfish, however these fish do have poor eyesight.

The Bigeye fish family is a family of species of large eyed fish. Similar to the Squirrelfish, they have large eyes and tend to be bright red or orange. There are 18 known species of Bigeye fish, 14 of which can be found in tropical waters of the Pacific Ocean. The remaining four species are native to the Atlantic Ocean. Their big eyes suit their nocturnal lifestyle and allow for them to hunt their prey.

Horse-eye jacks are relatively large fish, growing up to over two feet. They tend to swim in large schools and are sought after by fishermen as game fish. The Horse-eye jack has large eyes in comparison to the rest of their body, which helps them to find their prey- often small fish and small invertebrates like shrimp.

There are two species of Tarpon, both of which are impressive game fish known for putting up a fight when on a fishing line. They are large fish with large, shiny, half-dollar sized scales. It’s no wonder that they also have large eyes. They eat virtually any type of fish, even dead.

The Spotted ratfish is a chimera, a type of cartilaginous fish closely related to sharks and rays, but is still considered it’s own taxonomic family. They get the name ratfish from their long, pointed tails that resemble a rat tail. Spotted ratfish are easily identified from other fish by their pronounced spots, rodent-like tail, and large, reflective eyes.

Barracuda have a fierce reputation for being scary and intimidating fish due to their large, sharp teeth that protrude from their mouth. However, in reality they are quite skittish and afraid of people. They also have relatively large eyes that they use while lurking around coral reefs.

Genie’s dogfish is actually a newly described species of shark, only discovered in 2018. Up until then, it was considered another species of dogfish, the Shortspine dogfish but genetic analysis revealed that it was in fact its own species. This species of dogfish has large, cartoon-like eyes set on a small body as they only grow to be between 20 and 28 inches.

Blue Sharks, named for the Blue hue of their dorsal side of their body. This species of shark prefers cool, deep waters and can be found as far north as coastal New England and as far south as South America. They have big, wide eyes that gives them a goofy appearance.

You may also like:  13 Examples of Fancy Animals (Pictures)