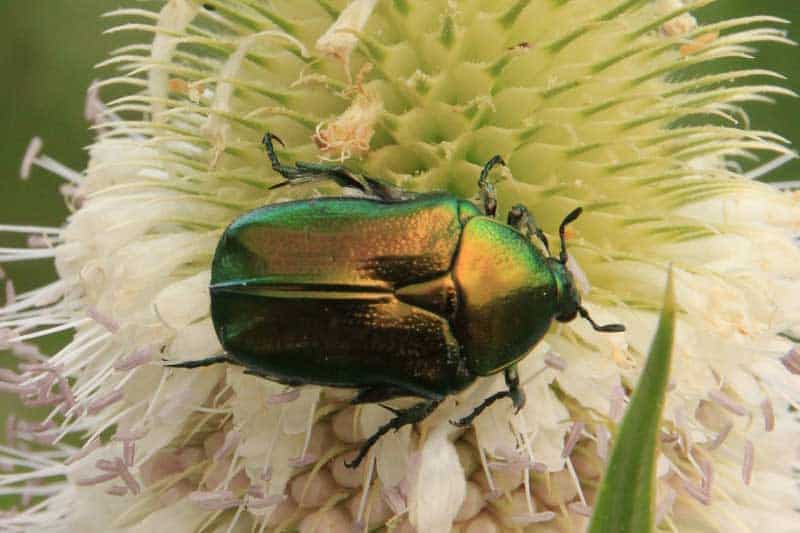 The name June bug can refer to over 900 species of scarab beetles found in North America and Europe. In the southeastern United States a medium-sized shiny-copper green beetle, also known as June beetles or green June beetles are most common.

The green June beetle, aka Cotinis nitida, is only one type of June beetle so the beetles you grew up knowing as June beetles may be another species that look different. They all have common characteristics and behaviors however.

You may often find them flying around and bumping into your porch lights or windows at night during the warmer months. With their constant close proximity to humans, you may have asked yourself, do June Bugs bite?

You may also wonder if there’s anything dangerous about June Bugs that you should be concerned about. If they perhaps pose any kind of threat to you or your pets. After all, they do have pinchers around their mouths and sometimes appear to be attacking us with their erratic flying.

To learn more about if June Bugs and if they pose a health risk for you and your pets, keep reading.

June bugs can bite – but not people or pets. June bugs, like all other beetles, have small mouthparts. However, these are designed for chewing and eating plants, not for biting people or for self defense.

Adolescent June beetles, known as larva, also have mouthparts. Like their adult counterparts, however, these are strictly for eating roots and plant materials, not biting or stinging.

June bugs also won’t pinch you. Their mouths are too small to cause any damage to people or pets. They also don’t have a pincher or stinger anywhere else on their body.

Can June Bugs hurt you at all?

Not intentionally. While June bugs won’t pinch or bite you, you may feel the occasional tinge of discomfort when they crawl on you. This is because June bugs, like a majority of scarab beetles, have sharp spines on their legs. These help them grasp onto surfaces without falling out.

As a result, when a June bug is crawling on you, you may sometimes feel a slight prick from the spines. This discomfort isn’t intentional, though, and you won’t have to worry about a June bug going out of its way to hurt you. They don’t bite, sting, or spread disease, making them relatively harmless.

Are June Bugs harmful or dangerous?

To humans, June bugs pose no risk of danger. They don’t bite or sting or pinch; they don’t spread disease. June bugs are, for the most part, harmless.

However, they can be harmful to your landscape. A June bug’s diet is made of plant materials. This means that they can destroy your garden and crops or leave your trees damaged. Their larvae are just as destructive, eating and damaging the roots of crops and trees.

As a result, you may find yourself looking for options to prevent June bug infestations, even though they aren’t harmful or dangerous to you or your pets. This, however, brings up another issue.

You may also like:  What Does a Marine Biologist Do on a Typical Day? (12 Examples)

While they’re not poisonous on their own, you may find it beneficial to learn about the toxicity of June bugs, especially if you have pets like cats or dogs.

June bugs aren’t poisonous or venomous. This means that they’re completely harmless in every way – from not pinching and biting to not being poisonous.

Cats love to chase and pounce on June bugs, and you may find your dog eating them as a crunchy snack.

However, that doesn’t mean that you should let your pets eat as many June bugs as they want. While they’re not poisonous on your own, June bugs can become poisonous enough to cause gastrointestinal upset like diarrhea or vomiting.

This is through their diet.

Since June bugs and their larva’s diets consist of plants, this means that they may be exposed to pesticides. Since they ingest only small amounts at a time, their body can build-up tolerance. This means that while they may not be affected by the pesticides, your dog or cat will if they eat a large amount at once.

While the toxicity from the pesticides wouldn’t be enough to kill your dog or cat, it can make them sick.

You may also find that it can become a problem if your dog or cat gets into a large pile of dead June bugs and eats them. Most likely, if there is a large source of dead beetles in one area, they died as a result of chemicals.

Like with their diet, if your dog or cat eats these dead beetles, they’ll also ingest the chemicals inside of the beetles’ bodies. This, as a result, can lead to gastrointestinal distress.

Where are June Bugs found?

June bugs are found in the northern hemisphere, especially North America, during warmer months of the year. They’re attracted to lights, so you’ll often find them around porch lamps.

How long do June bugs live?

Eggs are laid in the middle of summer and hatch about 18 days later. The larva molts twice during the winter, with the third larval stage lasting around nine months. The adults appear in the late spring where they prepare to mate, breed, and then pass away.

Why are June bugs so clumsy?

Though June bugs are meant for flying, like many beetles, their bodies aren’t designed for it. Their bodies aren’t aerodynamic, and they also have to open their elytra to allow for their wings to come out. In all, flying is a very awkward system for June bugs that renders them to be clumsy insects.

While it’s a common myth because of how they’re constantly flying into things and people, June Bugs aren’t blind.

Larval June bugs eat decaying plant material in soil, helping return nutrients to the food chain. However, since they also consume roots, they can be detrimental to lawns and gardens.

June bugs have a wide variety of natural predators, including frogs, snakes, and lizards.

You may also like:  How to Get Rid of Cave Crickets (12 Tips)