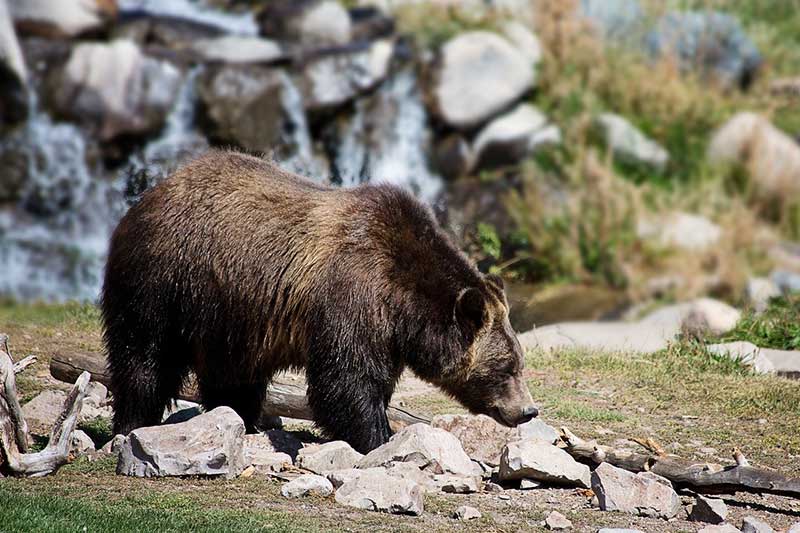 Bears are intelligent animals with a great sense of sight, smell, and hearing. You can find them in various habitats around the world, including the arctic, grasslands, and tropical rainforests. These animals have powerful paws and claws that help them hunt and dominate their environment. However, despite all their amazing features, do bears have tails? It’s easy to assume that they don’t. Read on to learn more about bear tails and whether different bear species have tails.

Do bears have tails?

Yes, bears have short, compact vestigial tails. Meaning they are small flaps of skin that extend from their bodies. Depending on the species, a bear’s tail can range between 2.4 inches to 8.6 inches. However, their tails aren’t very significant for their lifestyle.

Generally, bears live their lives as if they had no tail at all. They don’t need long tails because they don’t use their tails to communicate or for balance. They don’t even wag their tails when they get excited. If they did, you probably wouldn’t see it anyway.

What do bears use their tail for?

The main purpose of bear tails is to cover their rear end and protect them from the cold and potential parasite attacks. Typically their sensitive body parts are not covered in fur, so the tail acts as covering.

Some bear species will also use their tails to help them spread their scent. This act of “scent-marking” helps bears communicate and keep track of each other. This includes helping them mark their locations to find partners during the breeding season.

Did bears ever have long tails?

Yes, bears used to have long tails, hundreds of years ago. But over time, their tails evolved to become shorter since they didn’t regularly use them. While some animals use their tails for balance, speed, or communication, bears don’t so they didn’t have a need for long tails. Instead, they developed by having strength through their size and growing larger body parts, such as paws.

What bear has the longest tail?

The Asian sloth bear (Melursus ursinus) is known to have the longest tail in the bear family. Their tails measure around 5.9 to 7 inches long. In contrast to their small tails, these bears can grow up to 6 feet tall.

The bear with the shortest tail is the sun bear (Helarctos malayanus), which is also one of the smallest bears in the family Ursidae. Their tails average around 2 inches in length. They also have short fur compared to other bear species since they live in tropical forests in Southeast Asia and need to keep cool.

5 bears and their tails

Brown bears (Ursus arctos) have tails averaging between 2.4 and 8.7 inches long. Which is very short, considering they can grow to sizes of up to 5 feet tall. Brown bears are one of the bear species known to use their tail to wipe off secretions onto surfaces to spread their scent, especially during the breeding season.

Black bears, Ursus americanus, also have short tails. However, they can be hard to spot, especially when their coloring is all black. Typically their tails range between 3 and 5 inches long. Their tail helps protect their sensitive body parts that aren’t covered in fur. They will also use their tails for scent marking.

You may also like:  How Strong Are Kangaroos? (Answered)

Giant pandas (Ailuropoda melanoleuca) actually have the second-longest tails in the bear family. Their tails can measure between 4 and 6 inches long and are usually white or white and black. When they are smaller, their tails are a quarter of their body size. However, adult pandas have tails that are around one-tenth of their body size.

The panda’s tail has various glands, including one that releases an acidic odor. They use this odor to mark their scent onto territories for various reasons, ranging from establishing dominance to mating.

Polar bears (Ursus maritimus) have short tails ranging between 3 and 5 inches long. However, the area is usually covered in thick, long fur so it can be hard to spot their tails. Their tails have blood vessels protected by the fur and fat to help keep them warm.

While polar bears are strong swimmers, they don’t use their tails to help them swim like some mammals do. Instead, polar bears will use their muscular legs and large paws to swim.

Koala bears don’t have an external tail, and, despite their common name, they also aren’t bears. Koalas (Phascolarctos cinereus) are marsupials and closely related to wombats and kangaroos. Although their skeletal structures show signs of a tail, koalas don’t have one externally that you can see.

All bears have short and compact vestigial tails that are sometimes hard to see since it’s so small compared to their large body size. Bears don’t use their tails as regularly as other animals with tails do, so they’ve evolved to have shorter and shorter tails. Although the Asian sloth bear has the longest tail in the bear family, it still only maxes out at 7 inches long. Now you know that bears have tails and the limited ways they use them!