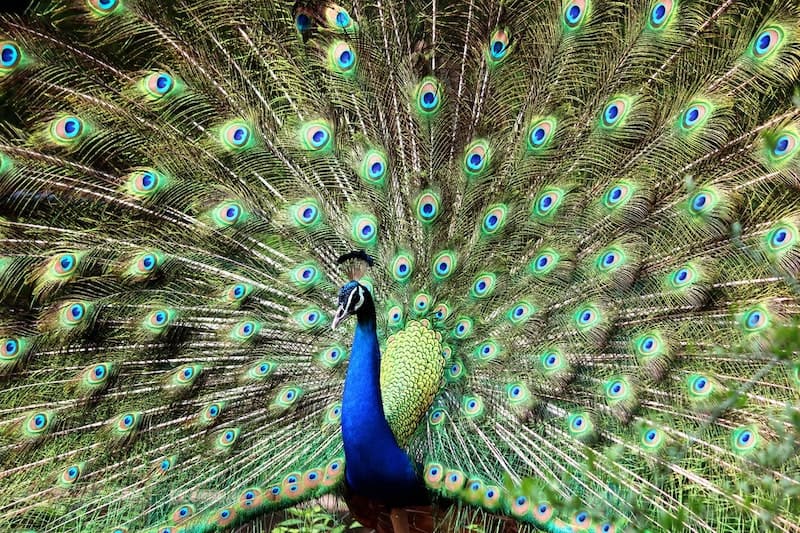 Have you ever visited the zoo or a wildlife park, and been captivated by the beauty of peacocks and their massive tail feathers? Native to India but transplanted all over the world, these birds have captivated us with their unique beauty. They are such large birds with incredibly long tails, and you’ve probably only ever seen them on the ground. This would lead you to wonder, can peacocks fly? 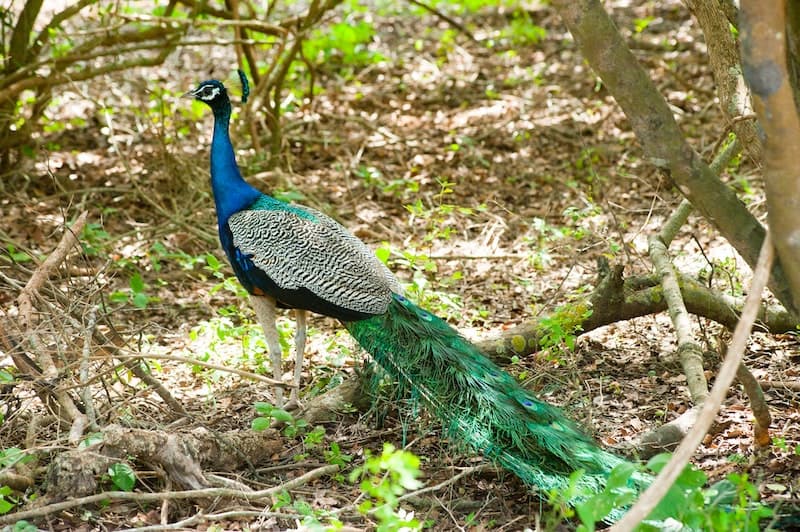 Yes, peacocks can fly. They are able to fly up into trees or rooftops from the ground. When it’s time to come down, they can fly down from their higher perches, although this often looks more like gliding with just a few wing flaps. You won’t find them soaring like an eagle, maneuvering like a hawk or darting from tree to tree like a warbler. Their flight ability is limited to short distances. They usually limit their flying to getting into, and back down from trees.

“Peacock” is actually the name given to a male peafowl. Females are called “Peahens”. The Peahens are much less brightly colored, and lack the extra long tail feathers. Peacocks are so visually striking with their massive halo of tail feathers and iridescent colors, people often forget the females look different and are called peahens, and just end up calling the whole species Peacocks. However the proper name for this species is Peafowl. For the purposes of this article, we will keep calling them peacocks. 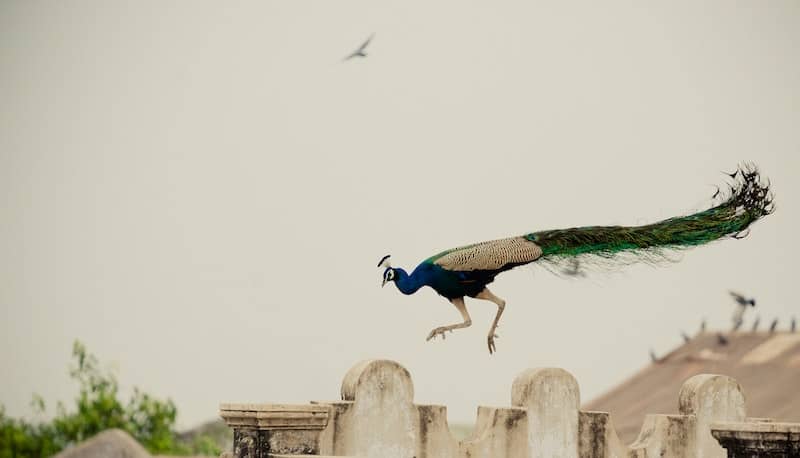 Are Peacocks a Flightless Bird?

As we’ve established no, peacocks are not flightless birds. But after observing them you may think they belong to groups of flightless birds such as ostrich, emu and rheas. While they don’t look a lot like those birds, they do have some characteristics that are similar such as strong legs with long clawed toes, a very large body, and are clearly made for walking and running on the ground.

Peacocks are members of the Phasianidae family which include ground-dwelling birds such as pheasants, partridges, chickens, and quail. All these birds have the ability to fly, however they spend the majority of their time on the ground.

When do Peacocks fly?

Peacocks are adapted to life on the ground. They scavenge and hunt for their food on land. They eat small mammals and reptiles, fruits, insects and seeds. In more urban areas they can eat human food scraps, while in the country they like crops and garden plants. They are pretty adaptable to many different food sources. Because they can access all this on the ground, they don’t need to fly to find food.

Peacocks are quite fast on land and can out run and out maneuver some of their predators. However they may fly as a last resort if they are trying to escape a predator such as large jungle cats, dogs, or even wolves.

Peacocks also roost in groups overnight in tall trees, or sometimes on other elevated areas such as rocks or buildings. These roosting groups can be quite large and groups of 100-200 birds have been recorded. So the peacocks will fly up to their night roosting spot, and fly/glide back down in the morning. 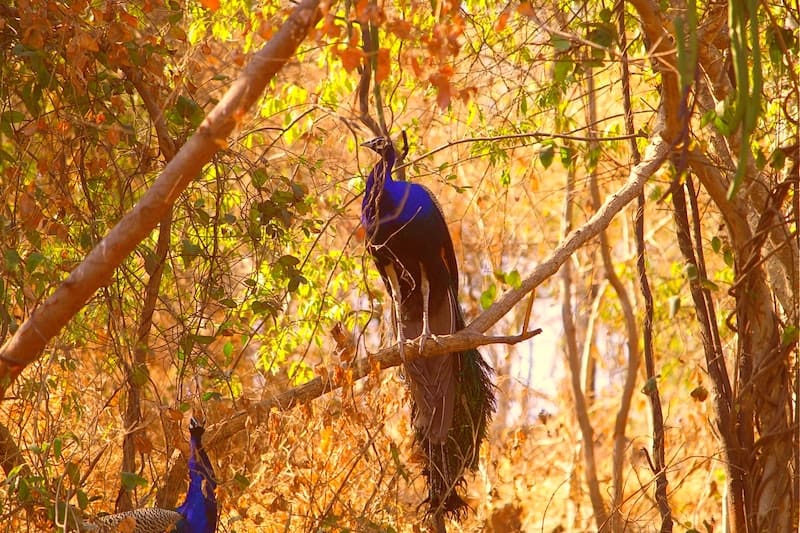 Do Peacocks tails prevent them from flying?

When you look at the long tail flowing behind a flying peacock, you might be perplexed as to how they manage to lift themselves off the ground. Technically, their actual tail has only about 20 feathers. However the “train” that is made up of the elongated feathers that drape over the tail can have more than 200 feathers and is about 5-6 feet long!

Surely this mass of 200 extra long feathers trailing behind them must hinder their flight ability. However, scientists believe it actually has no significant effects. In a study carried out by Dr. Askew of the University of Leads, peacock tails were clipped to confirm its effect on their flight.

Surprisingly, peacocks with clipped tails still struggled to take off from the ground, and their flight was similar to when they had full tails. This has lead researchers to believe that the gigantic plumage has little effect on a peacocks ability to fly.

“Intuitively, you expect that the train would detrimentally affect flight performance, and so not finding a detectable effect was a bit surprising,” Dr Askew stated. 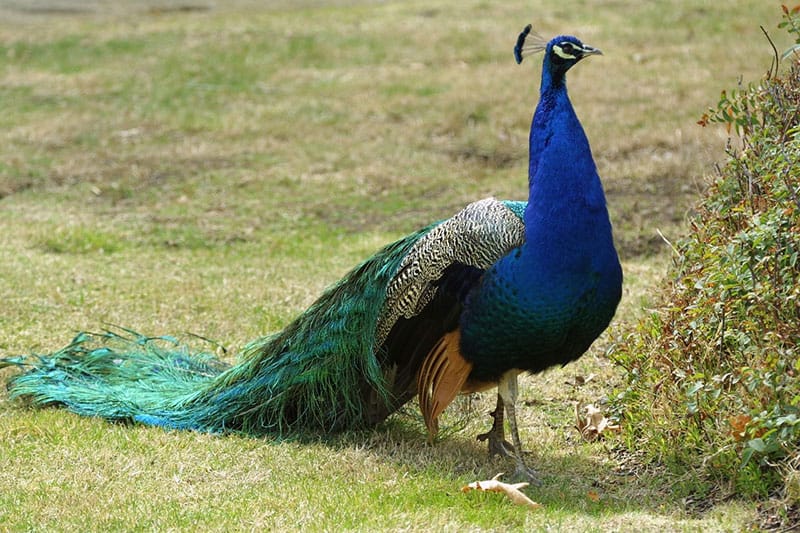 So if their massive feathers don’t inhibit them, why don’t they fly more often? Simply, they don’t have to. They have evolved to live most of their life on the ground. Peacocks don’t need to fly long distances to migrate to better weather or breeding grounds. They don’t need to fly to find or chase their food. Because of their success staying mostly on the ground in their habitats, they were able to grow larger bodies and use their energy in other areas, such as growing those massive feathers. Those beautiful feathers that they fan out and shake at the female peahens are an important part of the mate selection and breeding cycle.

However to this day scientists are still trying to figure out what exactly the females are looking for when they make their selection about which male to mate with. The colors and the spots and the size must have something to do with selection. But also, the sound. The males will shake these large feathers in what is called a “train rattle“. This causes a vibration in the air that peahens notice and feel. There are still many mysteries of these tail feathers to discover!

Contrary to popular opinion that peacocks are flightless birds, they are able to use their wings to take to the sky. They don’t belong to the family of the ostrich or emu, but rather other ground birds like pheasants. They may not fly like birds you typically think of, but they can get themselves up into a tree and land back on the ground from tall places. Peacocks are truly unique and beautiful birds that we are still learning more about.