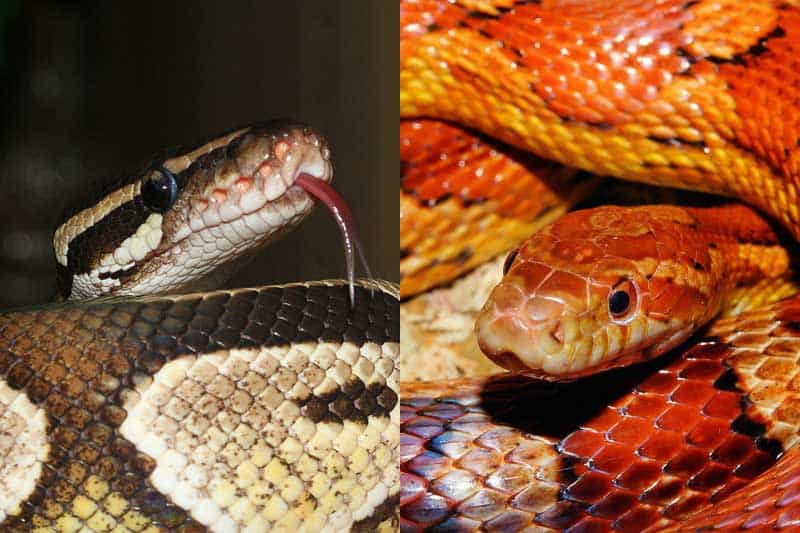 Snakes are on the rise as pets in North America, and the two most commonly debated between are the Ball Python and the Corn Snake. Both from very different parts of the world, but very similar in temperament as well as requirements for housing, let’s analyze the Ball Python vs Corn Snake as a pet to figure out which one will be the perfect new addition to your home.

Ball Python vs Corn Snake as pets – which is right for you?

When choosing a pet, it’s incredibly important to do the research to figure out which one will be the best fit for both you and them. For snakes, the most important features are the terrarium, the food, the temperament, and your passion for their unique look and habits. It’s important to remember that no two snakes, even those of the same species, are the same, so this is simply a generalized overview of these species and your final decision should come down between which individual clicks with you!

Ball pythons are fantastic pets for both beginner snake enthusiasts and more experienced owners who may appreciate them more for their various color morphs. They’re very docile and relatively easy to care for, and housing can range from simple to elaborate.

Their natural habitat is the savannah, grassland, and sparsely wooded areas throughout Africa. They’re actually the smallest of the African pythons, which is another reason they’re so beloved as a pet.

It gets its name from the way it coils around its head and into a ball when frightened, as they’re also notoriously shy. They’re nocturnal and prefer to hunt at night while resting during the day in underground burrows in the wild, or “hide boxes” within enclosures.

Ball Pythons are notoriously finnicky eaters, especially the younger ones, and hide boxes are especially important to make them feel safe when in a new enclosure. Like many pythons, they can go for several months between meals, which can cause their owner lots of stress if they were unaware of this, but it’s completely normal and is only a concern when accompanied by significant weight loss.

Young snakes are typically fed baby mice and rats and eventually transition to adult mice and rats as they grow. You should generally never give your snake live prey, as they can bite and scratch your pet and cause mild to severe damage. Frozen-thawed mice and rats are much safer and less expensive, plus can be stored more easily and are easily found at pet stores specifically for your Ball Python.

Who should consider owning a Ball Python?

The most important thing to consider when getting a snake is how comfortable you are feeding a carnivore. It can be jarring the first time feeding them, and many people realize quickly that they aren’t prepared to thaw out frozen rodents or to kill the animal themselves to give to their pet.

They aren’t a purely decorative pet either, so you need to be comfortable handling and holding them at least once a day. They genuinely like human touch and enjoy interacting with us.

You should also be patient, as Ball Pythons aren’t known to operate on our human schedule. Night owls will get the most enjoyment out of them, as they prefer to be active and moving when the sun goes down. Furthermore, you may present a meal to them and they won’t eat for days at a time, but you can’t get discouraged and should keep trying to feed them.

Once they finally eat, then you need to allow a few more days to pass to allow them to digest it before feeding again. They also shouldn’t be handled until their digestion process is done to prevent any issues.

It’s also so important to note that this snake is extremely long-lived and will usually be with you for a while. When deciding if you’re ready to make the commitment, and far before you start buying the necessary supplies which will be an added expense, you need to make sure that in the next 20-30 years you’ll still be prepared to be taking care of your Ball Python.

Pros of owning a Ball Python

Cons of owning a Ball Python

Ball Pythons make excellent pets, especially for first-time snake owners. They have a very sweet disposition and enjoy being handled, although not after eating. They’re very low maintenance animals, only needing to be fed and cleaned up after once a week. They’re long-lived reptiles that can be your companion for up to 40 years if taken care of properly and would be a fantastic addition to your home!

Corn Snakes make excellent choices as pet snakes. They’re native to the Southeastern United States, so if you’re looking for a more local species this is the one you want. They’re generally very low-key and docile, preferring to burrow and hide but will still allow people to handle them.

The most important thing to buy when getting a Corn Snake is a solid cage with a secure-fitting lid that can be clamped down. Corn Snakes are very strong when holding themselves up, and they absolutely will push at the lid with their noses while looking for weaknesses – they’re notorious escape artists.

Corn Snakes are also avid climbers, so you should be sure to provide them with a branch or two within their terrarium. Another bonus of this snake is because it comes from a temperate region, it doesn’t require as much heating as other types of snakes and an overhead incandescent heat light is usually all they require.

Prey for them should also be pre-killed frozen mice or rats to prevent any injury to your snake from the prey animal, which is more common than you’d think. The size of the prey should increase as the snake grows and they generally only need to be fed every week or two. You can reduce feeding frequency if they’re about to start shedding though, which can be nice for some owners.

Their water dish needs to be meticulously cleaned, as it’s common for this species to defecate in the water. If this happens, the waste needs to be cleaned immediately.

Corn snakes are generally docile and are easy to tame with repeated handling. They very rarely bite and are inquisitive and relatively active for another nocturnal species. They’re also unique in that they prefer a smaller enclosure and large open spaces can end up being stressful for them. A good guide is approximately 1 square foot of floor space for each foot of snake.

Like the Ball Python, the Corn Snake also shouldn’t be handled directly after feeding, as this can cause them to regurgitate. Even after eating, some personality types will prefer not to be handled as often as others, so you need to have patience and listen to the preferences of your own.

Who should consider owning a Corn Snake?

Just like with the Ball Python, you need to be comfortable with feeding a carnivore and be aware that you will be feeding them things that used to be alive. Like any pet, you also need to be prepared for multiple vet visits, especially since Corn Snakes are more susceptible to water-borne bacteria, fungi, and other infections.

They’re still a long-lived snake, but not as long as the Ball Python and are a slightly less long-term commitment. Nonetheless, it will continue to be your companion for many years if taken care of properly.

Essentially the same concerns as mentioned under the Ball Python need to be considered, including the cost of your terrarium and the kinds of long-term care that will eventually be required. Slightly less patience is required with the Corn Snake though, as they’re generally better and more voracious eaters than the Ball Python and are pretty consistent with their eating patterns, other than when they’re getting ready to shed their skin.

Pros of owning a Corn Snake

Cons of owning a Corn Snake

Corn Snakes absolutely make for amazing pets, and are highly recommended for beginners of all ages. They’re docile and are fine with being handled and touched, although never after eating and be sure to especially wash your hands before and after handling them like all reptiles. They’re still low maintenance and can come in some gorgeously brilliant morphs that make them a unique and remarkable pet.

The Ball Python and the Corn Snake are very similar as far as pets. Although they do have many similarities, they are two very different snakes. They’re both carnivores and both require terrariums with heat, and both enjoy being held by people and are generally docile. When comparing the two as potential pets, their biggest differences are in the terrarium and their longevity.

There are also differences in their habitats and cages, with the Corn Snake being slightly lower maintenance and requiring a smaller cage and cheaper substrate. The Corn Snake can even be given newspaper as a substrate to live on, while it’s recommended for the Ball Python to have the slightly more expensive terrarium and reptile carpet.

Overall, it comes down to the aesthetic and style you prefer for your snake. Personally, I like the pattern and face shape on the Ball Python best, especially the Bumblebee and Lavender Albino morphs, but there are many brilliant and gorgeous morphs of the Corn Snake as well. Either way, if you’re looking for an amazing and unique new pet, you can’t go wrong with either as both make great, docile, and easily handled pets for both adults and children.