Nevada’s varied types of habitats makes it quite hospitable to a wide range of wild birds. It is also in the path of migratory routes for a lot of species that change their place of residence through the year. The owls in Nevada have a variety of habitats to choose from, including high-altitude forests as well as deserts, which contributes to the fact that there are 10 species found in the state today.

A couple of other species may have been sighted in the Nevada, but the 10 in this article have a range in the state according to allaboutbirds.org.

Owls are voracious hunters and help control rodent and in some cases, insect populations. Most of them are strictly nocturnal, but some species are also active during the day and easier to find. If your property is in the right sort of habitat for some owls, you can put up nesting boxes to encourage them to live in your neighborhood.

This can work particularly well if you’re trying to entice a species that likes to nest in trees or other structures in an area where those sites are scarce.

Here are some the owls that live in Nevada either year-round or seasonally!

10 species of owls in Nevada

Common throughout Nevada, the Long-eared Owl likes to live in dense trees near grassland or pasture areas. These birds often roost in small communities in clumps of trees during the winter, and can be easier to spot this way.

Long-eared Owls use abandoned nests built by other birds rather than building their own. While they don’t tend to call as frequently as some other owl species, the male’s call can be heard over a kilometer away.

Short-eared Owls are residents in northwestern Nevada year-round, but only come to the rest of the state during the winter. These birds like open ground, and are sometimes easier to spot than other species because they often hunt during the day.

Female Short-eared Owls are reluctant to leave their nests, and will often defecate on their eggs. It’s thought that the odor may also help disguise the location of a nest, or just be a general repellent to predators.

The Western Screech-Owl stays in one area year round, and Nevada is squarely in the middle of its range. They adapt well to a wide variety of habitats, from wooded areas to mesquite groves and saguaros in more desert areas.

When roosting in trees, Western Screech-Owls will sometimes press their head against the opening of their nest for camouflage, poking their face out to blend in perfectly with the bark of the tree around them. Occasionally, they will prey on animals larger than they are, such as cottontail rabbits. 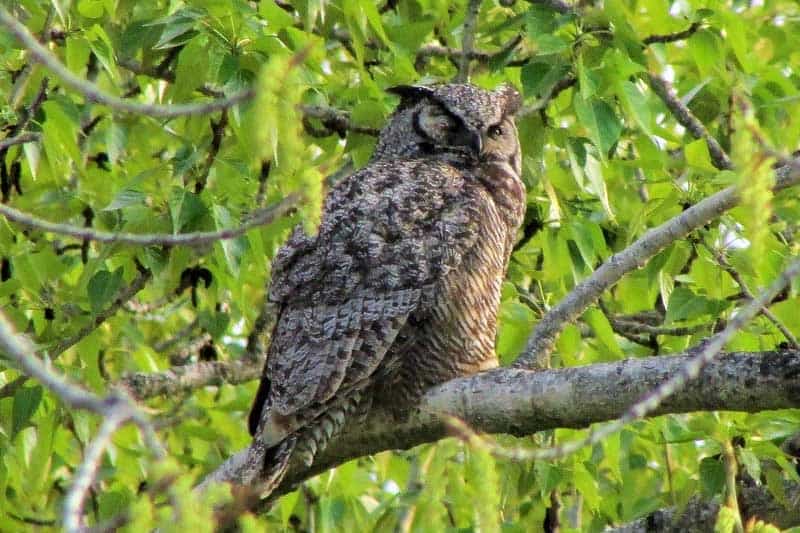 Great Horned Owls are found all over the country, and adapt well to many different types of land. Comfortable in forests or desert, they can be found year-round not just in Nevada, but throughout North America. During the breeding season, they avoid open areas to protect their nests.

These birds are fierce hunters, and will even attack other birds of prey, steal nestlings, and bully other owls out of a territory. Their strong grip helps them sever the spine of their prey.

Burrowing Owls are resident in Nevada during their breeding season, but then travel south for warmer climes during the winter. They live in underground burrows, usually ones abandoned by prairie dogs or other animals.

Because of where they like to live, these owls are becoming more rare because their burrows are increasingly hard to come by. They have an extremely varied diet, eating everything from small mammals to grasshoppers or scorpions.

While Barn Owls do often live in barns, they will also nest in any abandoned sheltered space. They like semi-open areas to hunt, and are happy in grasslands as well as deserts, provided they have suitable shelter. Common throughout much of the country, they are year-round residents of Nevada.

There are 46 different species of Barn Owl around the world; the one in North America is the largest. These birds are almost exclusively nocturnal, and have amazing night vision as well as hearing.

These tiny owls are only seen in the more mountainous areas of Nevada, preferring forested places with some open space. Often active during the daytime, they lie in wait and ambush smaller birds.

Perhaps because they are daytime hunters, Northern Pygmy Owls lack the asymmetrical ear placement that is common in other owls to give them advanced hearing skills. These birds also have dark spots on the back of their heads to look like eyes.

Common in many forests in North America, the Northern Saw-whet Owl is usually only found in more densely wooded areas of Nevada. Even then, these birds are only in the area for the nonbreeding colder months of the year.

Flammulated Owls are very migratory, and only spend the breeding season in Nevada before migrating down to Central America for the winter. They are very reclusive, well-camouflaged and hard to find, nesting in large trees.

These tiny owls prefer insects and other invertebrates over other kinds of food. Because Flammulated Owls are so hard to spot, they were considered very rare until quite recently.

Elf Owls are mainly found in Mexico and Arizona, but they can sometimes be found at the very tip of Nevada’s southern border as well. They live in saguaro or mesquite groves, as well as wooded canyons. When winter comes, they head further south into Mexico.

These sparrow-sized owls will play dead if they are handled, hoping to catch a potential predator off-guard just enough to make their escape. They only eat insects and other invertebrates, which may be one reason that they migrate so far south for the winter – to find more suitable food.

A good place for any prospective birder to start is by checking out information from the Audubon Society, a wonderful source. There are a number of state and national parks, wildlife reserves, and other areas throughout the state where you can find these owls if you are lucky.

If you’re near Las Vegas, Floyd Lamb Park at Tule Springs is one of the places to find Burrowing Owls and some other species. Spooner Lake in the Lake Tahoe basin is a great place to go birding, and is home to the Northern Pygmy-Owl among others. In the west of the state, Carson Valley is home to quite an amazing array of bird species, including several owls.

The Audubon Society has a great map of sites across the state that they have flagged as Important Birding Areas (or IBAs), which can be a useful tool in finding species in Nevada that you’re interested in.