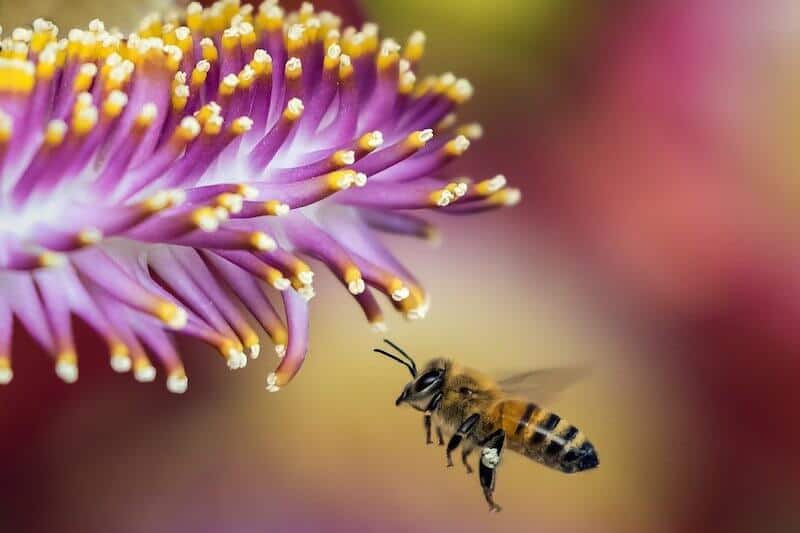 Florida is home to a vast array of wildlife, in part due to its warm and wet climate. Everything from bugs to mammals tends to thrive in one of Florida’s many ecosystems. In this article, we will look specifically at some of the common and interesting hornets, bees and wasps in Florida.

If you don’t know much about these unique animals, it’s likely you may have a fear of them. Mellissophobia or apiphobia (the fear of bees) is one of the most common phobias. After reading this article and learning a bit more about them, I think you will realize that hornets, bees and wasps are a vital part of our ecosystem.

12 Hornets, Bees, and Wasps in Florida

There are hundreds of species of hornets, bees, and wasps in Florida, but in this article, we will be taking a look at 12 of the most interesting specimens.

Despite their name, velvet ants are actually wasps. They get their name “ant” from their ant-like appearance, and the fact that the females of this species do not have wings. Also known as a cow killer, velvet ants are capable of incredibly painful stings.

Females of the species are bright red in color and have a modified stinger which also acts as an egg-laying apparatus or ovipositor. Their large size is what causes the stings to be incredibly painful, however their venom is quite mild.

This species is solitary with males and females only finding each other for breeding purposes. If you encounter a velvet ant, be sure to give it a healthy amount of respect or you could be on the other end of one of its terrible stings.

There are several species of paper wasps in Florida, but Polistes carolina is the one we will focus on today. These wasps are generally nonaggressive unless they feel their hive is being threatened, then they will sting the person or animal who is causing the threat.

They get their name from their nest, which is made from saliva and wood which tends to look like paper.

Each colony of paper wasps is made up of a queen and one or more of her sisters who act as workers. Which female becomes queen is determined by who reaches the nesting area first.

The females that don’t become queens will suppress ovary development unless the original queen dies, at which time the next in line will take up the throne and start to develop a reproductive system.

If you dislike spiders, mud daubers will likely be your favorite on this list. When mud daubers are ready to lay an egg, they will catch and immobilize a spider and then put it inside their mud nest and lay an egg on it. When the egg hatches, the baby will feed on the trapped spider until it is ready to emerge from the nest.

Mud daubers are generally nonaggressive, but like most of the species on this list, they will defend themselves and their nest if they feel threatened.

The honeybee is basically America’s sweetheart of the bee world. These bees pollinate our crops and flowers and give us the delicious honey we all love. They have even inspired Hollywood with the Bee Movie and the honey nut Cheerios mascot.

Whether you like honeybees or not, it’s no secret that they play a vital role in the food industry. There are over 4000 registered beekeepers in Florida, managing over 500,000 hives, which is a huge increase over just a few years ago.

If you have a garden, be careful what pesticides you use so you don’t hurt your local pollinators.

If you have had a run-in with wasps in your life, it was probably yellow jackets. These wasps are one of the more aggressive species on this list when defending their nests and each individual is capable of stinging multiple times.

Living in social groups of up to 4000, yellow jackets usually make their nests underground or in holes in dead trees.

Yellow jackets mainly eat other insects, but they do also eat dead animals and plant nectar.

The fluffiest and biggest of all the bees on this list is the bumblebee. These cute critters are more tolerant of cool weather and usually come out earlier in the year than other bees and stay out longer in the fall.

They typically have ground nests and are very social, with one nest usually consisting of about 50-200 individuals.

Queens generally hibernate over the winter before waking and laying the eggs that produce worker bees, males, and more queens.

Carpenter bees are one of the few long-lived species on this list with queens living up to 3 years. These bees are active year-round but usually nest twice per year in the spring and summer.

When a female nests she will burrow a hole into wood and lay 6-8 eggs that are separated from each other by a mixture of pollen and chewed wood. The female will then stay with her eggs until they hatch. Unfortunately, they are known to chew these holes into the wood of decks and windowsills.

Some gigantic wasps like these, known as giant ground hornets, can be terrifying to run into, but they are actually quite docile and will usually avoid humans.

Males of this species are highly territorial and will fight other males that come into their territory for the privilege of mating with their females.

This species makes burrows in the ground and feeds almost exclusively on cicadas. A sting will paralyze the cicada, which can then be dragged off to the burrow.

Once thought to be extinct, this beautiful bee was recently rediscovered in central Florida.

Not much is known about these rare bees, but they are thought to be solitary ground dwellers. It is believed they feed exclusively on the pollen from a plant called Ashe’s calamint, which is also endangered due to habitat loss.

You may also like:  6 Species of Hawks in South Carolina (Pictures)

Blue Calamintha bees have a unique way of harvesting pollen. They take their extra hairy faces and rub them on the flower to pick up as much pollen as possible.

Bald faced hornets are a type of yellow jacket that is named for their white faces.

These wasps are very social and build large nests, which can be a nuisance to people since the bald faced hornet will defend its nest viciously if they feel you are too close.

When not around humans, they are considered to be beneficial as they do eat other pest insects such as flies and some caterpillars.

The metallic green sweat bee is a semi-social bee. The females live alone in individual apartments that come off of a main communal entrance.

In Florida, these bees live in the ground in small mounds that have an entrance that is roughly the size of a pencil.

Called sweat bees due to their attraction to human sweat, these bees will lick the perspiration off humans in order to get the much-needed salt in their diet. These bees rarely sting but can cause a minor sting if you squish them on your skin.

When people think of bees, the ones that come to mind are likely the bumblebee or the honeybee, but there are actually tons of other bee species out there.

Leafcutter bees are one of those lesser-known types. There are over 75 species of bees in the Megachilidae family, but it really breaks down into three subtypes. Leafcutter bees, orchard and mason bees, and cuckoo bees.

Leafcutter bees are unique because they are solitary bees, they often make their homes in wood holes or in plant stems and they line their home with pieces of leaves or flower petals that they cut with their specialized mandibles.

If you notice neatly cut pieces of your plant leaves are missing and you think it might be leafcutter bees, don’t worry, because leafcutter bees do not damage the plant enough to hurt it and they are pollinators, so your flowering plants will love them.

There aren’t many creatures as maligned as bees, wasps, and hornets. While some are actually quite aggressive, most are just our friendly neighborhood pollinators. Bees are responsible for pollinating most of the crops we eat and most of the flowers we enjoy.

Be sure when using pesticides in your home garden that you use one that is bee safe. Many of our native pollinators are declining and we should all do our part to protect them.